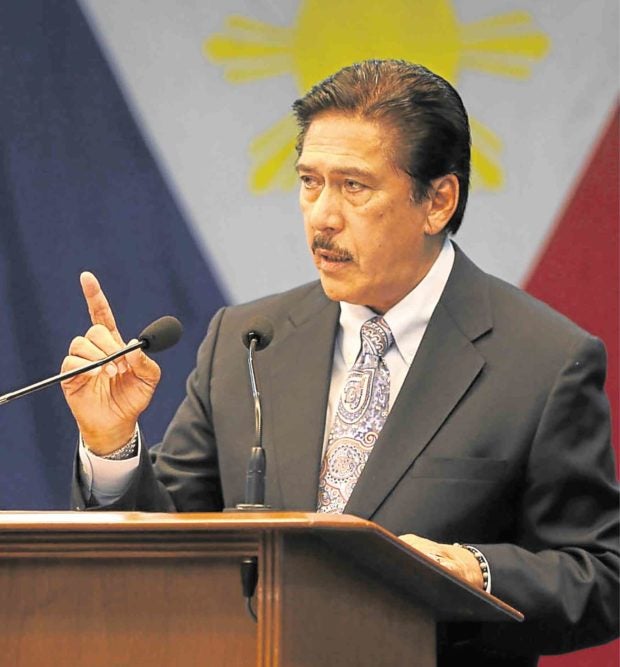 The Inquirer.net articles linking him to the withdrawal of charges against the suspects in the alleged rape of movie starlet Pepsi Paloma were the “original fake news,” according to Senate President Vicente Sotto III.

Sotto said he expected these to be removed from the site.

The National Union of Journalists of the Philippines, which criticized his request to remove the articles from the website, do not know what really happened and should talk to the Inquirer, he said.

“That is the original fake news, so do not make a big deal out of it,” Sotto told reporters at the Senate on Monday.

Asked if he would file libel charges if Inquirer.net failed to remove the articles, he replied: “They will.”

Pressed to confirm if he meant the Inquirer would take down the stories, he reiterated that these were “fake news, it’s original fake news.”

Sotto also disputed allegations that his request trampled on freedom of the press.

“You mean if I say that the people who are maligning me were paid to do so, that is freedom of the press? No. Original fake news,” he said.

As for allegations that he was using his position to bully Inquirer.net., he said people should ask the website how it considered his request.

“Ask the Inquirer if I am bullying them,” he said.

Sotto last month asked Inquirer.net, the Philippine Daily Inquirer’s website, to take down three articles that he said maliciously linked him to the Pepsi Paloma case.

The articles were written by Rodel Rodis and discussed the reported rape of Paloma in 1982, questions on whether her subsequent death was really a suicide as ruled by authorities, and Sotto’s denial of involvement in efforts to whitewash the case.

In his request, Sotto said there was a “malicious imputation of a crime” against him in the articles, which were detrimental to his reputation.

“These kinds of unverified articles have been negatively affecting my reputation for the longest time,” Sotto said in his letter, dated May 29.

“My efforts to clarify my side were somewhat ineffectual by reason of the aforecited articles were shared by your readers to the social media,” he added.

He also said his request was not intended to trample on freedom of the press, and that he supported the media in protecting these rights.

“Just like everyone, I am for the truth — a ‘balanced news,’ so to speak,” he added.