Police looking for motive, more suspects in killing of priest in Nueva Ecija 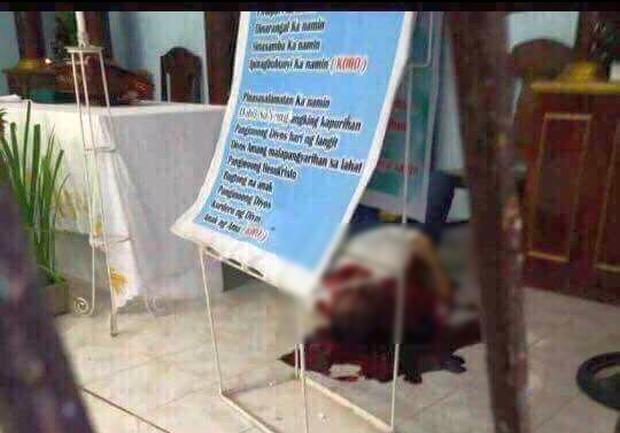 Fr. Richmond Nilo lies bloodied in a chapel in Zaragoza, Nueva Ecija, after being shot as he was about to celebrate Mass on Sunday, June 10, 2018. (Photo by SONIA CAPIO)

TAGBILARAN CITY, Bohol — Police investigators on Friday were still piecing together witness accounts and surveillance video in an attempt to determine the motive in the killing of Fr. Richmond Nilo, a Catholic priest, in Zaragoza town in Nueva Ecija.

READ: Priest shot dead in chapel at start of Mass in Nueva Ecija

A suspect in the killing was arrested Thursday evening in San Isidro, Nueva Ecija, but the case was still not considered solved, according to Director General Oscar Albayalde, Philippine National Police chief.

“We are looking for four to five other suspects dito,” Albayalde told reporters in Bohol.

“As to the motive, we have not yet established that here,” Albayalde added in a mix of Filipino and English.

He said investigators were looking at three motives for the killing – the advocacy of the priest for rape victims, a land dispute, and his criticism of other religious groups.

Based on CCTV footage, he said the gunman had someone else driving his motorcycle and he had back-ups in another vehicle.

“Hopefully, in the coming days we can recover the vehicle and find out who owns it,” he said.

Nilo was shot dead last Sunday, June 10, as he was about to start evening Mass in Zaragoza town in Nueva Ecija.

He was buried Friday morning, June 15, in Cabanatuan City.

Nilo was third priest killed in six months under President Rodrigo Duterte, who had been accusing the Catholic Church of hypocrisy. /atm