PORAC, PAMPANGA—Benzon King was 19 years old when Mt. Pinatubo blew its top on June 15, 1991 after more than 400 years of slumber.

The forced exodus of his family to the lowlands kept him away from the mountain but his memories of its beautiful verdant forests could not be erased 27 years after the Pinatubo eruption.

“The trees were so large that a trunk of lauan or palosapis filled a truck. Inside the forest, it was cool. It was free air-con. We also hunted wild pigs and chickens that rested on big ‘balete’ trees. And there were ‘lagutok’ and ‘pakpak lawin’ orchids [which] our folks sold in the lowlands,” King said.

King remembered the vine, “lunas bunduk,” used to treat snake bites and the Pinatubo grass, “payiyit,” that helped women space their pregnancies. Angelina, his mother, has yet to again find “gugo” to shampoo her hair with again.

“The forest also gave us lots of water,” said King, who maintains a home in Barangay Villa Maria where most residents of Inararo stay.

“We want to revive the forest,” he said. 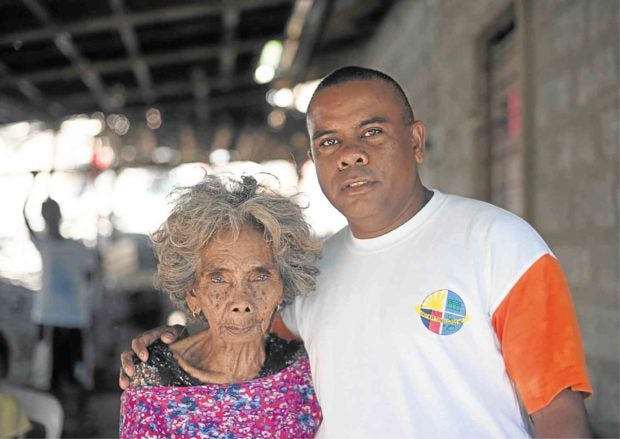 Barangay chair Benzon King of Inararo, Porac town, with his mother. The Aeta family fled the village to escape the Mt. Pinatubo eruption in June 1991.

There may be basis to realize his wish as his grandfather, Miranda, and five other families have settled back in the old village because the ground was now “kind to agriculture.”

Just a year after the eruption, botanist Domingo Madulid called for a “detailed ecological and floristic study of Mt. Pinatubo over a given period of time,” saying this would “give important information necessary in understanding the complex processes involved in bringing back to life this once tropical paradise.”

Mt. Pinatubo, Madulid said, used to be “one of the botanical centers in Luzon, teeming with numerous endemic species.”

In 2006, ecologist Thomas Marler of the University of Guam and his colleague, Roger del Moral, identified about 60 plant species, 34 of which were not native to the eastern slopes of the volcano.

“Continued delays in conducting surveys throughout all of the recovering habitats may waste crucial time for conservation efforts, as the cost of bringing severely diminished populations back to the levels at which they are not endangered may be severely high,” Marler said in an online publication in 2011. 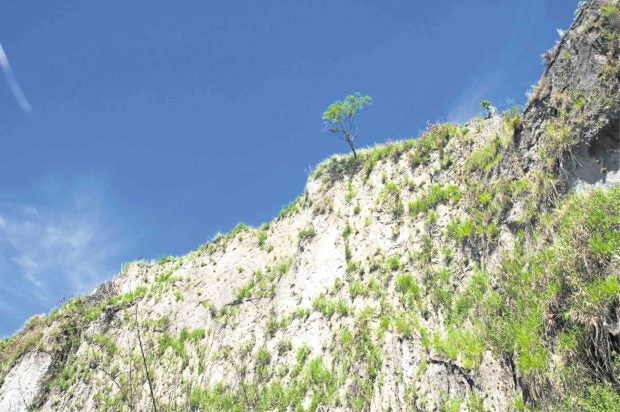 Twenty-seven years since Pinatubo blew its top, only sparse vegetation grows on a hill of volcanic ash in Porac, Pampanga.

From 2011 to 2017, the Department of Environment and Natural Resources (DENR) reforested 160 hectares of the 3,420 ha under the National Greening Program (NGP) in an area covered by a certificate of ancestral domain title (CADT).

The Archdiocese of San Fernando’s Social Action Center of Pampanga worked with the DENR in reforesting an additional 400 ha in the Porac mountains surrounding Pinatubo.

In the uplands of Floridablanca town, the Pampanga provincial government is reforesting 1,000 ha in Barangay Mawakat, Nabuklod and Camachile, and building roads and irrigation canals there.

But the Aeta cannot have all the mountains to themselves as private companies have been allowed to venture into some of these areas, in some cases with their free and prior informed consent (FPIC), a legal requirement for anyone who wants to utilize portions of ancestral lands.

One company now operates a hot spring resort at the boundary of Porac and Angeles City. Two companies have obtained mineral production sharing agreements over 713 ha in Inararo and 393 ha in Barangay Camias, both in Porac. 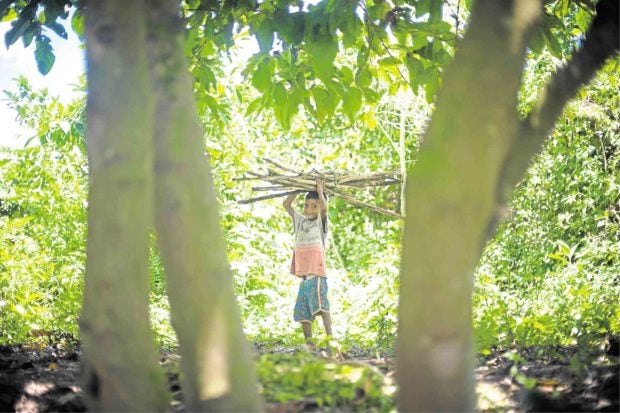 The greener parts of the mountain, however, offer a ready source of firewood for an Aeta boy.

There is also mining exploration permit covering 1,107 ha in the towns of San Marcelino, Castillejos and Subic, all in Zambales. Mining, pasturing, mineral exploration projects received FPICs to 18,037 ha in that province.

Redondo Peninsula Energy Inc., a coal-power generator, was allowed to use 35 ha for a transmission line in an ancestral domain in Subic that it would operate until 2042.

The DENR also continues to put forestry projects in Zambales and Tarlac in the hands of private individuals or companies under 25-year production sharing contracts, or up to 2035. Several of these deals are for areas at the foot of Mt. Pinatubo itself.

These agreements allow tree planting and logging at a time when preserving forests is crucial to sustaining biodiversity and mitigating climate change.

Totaling 26,165 ha, these agreements cover an area larger  than the 14,141 ha under the contract reforestation and integrated social forestry projects in Pampanga, Tarlac, Zambales and Bataan shortly before the 1991 eruption.

Central Luzon has the most number of Ifma holders in the country, according to the National Economic and Development Authority. In 2011, 26 percent (245,199 ha) of the region’s total forest lands were covered by Ifma and similar contracts.

From 2007 to 2017, community-based forest management projects under the Comprehensive Agrarian Reform Program were undertaken in 570 ha in Zambales. These projects, worth P11.6 million, were for a mix of hardwood and cash crops.

Outside the NGP, the DENR reported it had rehabilitated watersheds and mangroves under an integrated coastal resources management program in 438 ha from 2009 to 2013.

Indigenous communities quarreling over land and other issues may get the least reforestation support, according to Judelyn Francisco, NGP assistant regional coordinator.

A group of Aeta and the state-owned Clark Development Corp. (CDC) have entered into a joint management agreement in 2007 to develop 10,323 ha of their land in parts of Bamban town in Tarlac and Mabalacat City in Pampanga for commercial, agricultural and tourism ventures.

The Aeta are demanding an accounting and their share of the revenue or social projects from the proceeds of the agreement with the CDC. This demand is complicated by the meddling of land speculators.

A CADT which covers 11,445 ha in parts of Bamban and Capas towns in Tarlac overlaps with lands formerly leased by the US 13th Air Force and placed under the jurisdiction of the Philippine Air Force (PAF).

As a result, the PAF would stop the Aeta from bringing in materials to build their homes and bringing out their produce during weeks-long war games.

The destruction of the forest by Pinatubo’s eruptions has directly affected the way of life of the Aeta, who rely directly on nature and live largely by hunting and gathering and slash-and-burn agriculture.

There now are fewer plants for food and medicines for the Aeta, particularly on the slopes of Pinatubo.

A 2011 ethnobotanical survey recorded only 83 food plants, down from 126 listed by anthropologist Robert Fox in 1956. The survey said only 167 medicinal plants remained from the 297 Fox had found.

“Prior to the eruptions, the exploitation of the forest of Mt. Pinatubo was undertaken in large-scale by mining companies and big time loggers. However, the eruptions were the single largest event that had the greatest impact on its forest,” according to the 2011 survey, designed by the late botanist Leonard Co.

The survey was undertaken by Co’s colleagues from the University of the Philippines to help “Balik Kagubatan,” a reforestation program proposed by Aeta leaders Benny Capuno and Arnel Valencia.

Before starting the NGP in 2011, the DENR sent its own staff to plant trees or had contracted the reforestation and integrated social forestry projects to private groups and individuals in the 68.145-ha Bucao watershed of Zambales and Tarlac, including the Pinatubo subwatershed.

The DENR in 2011 documented 44 tree species thriving in the Bucao watershed, some of them endemic (original growths) and critically endangered, such as the palosapis, apitong and lauan.

It recorded 13 kinds of birds, five types of reptiles, six species of mammals, amphibians, such as toads and frogs, and 16 kinds of insects in the watershed.

The UN Development Program has also supported reforestation through funding grants to nongovernment organizations, such as Technology Resources for Economic and Ecological Sustainability (Trees) in Botolan, and to Health for All Foundation in Capas.