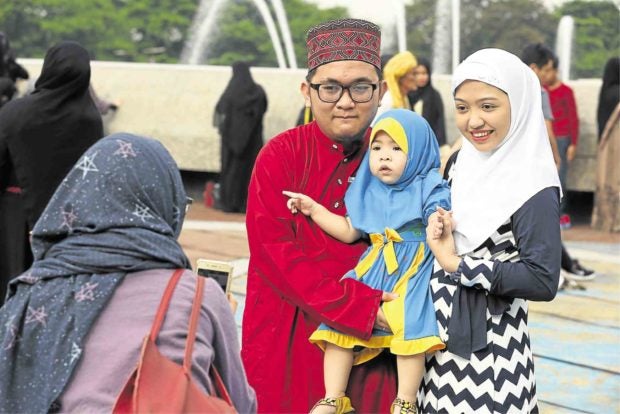 MARAWI CITY—Thousands of residents here, home from evacuation centers where they fled after Islamic State-inspired gunmen laid siege on the city, joined separate community prayers for Eid al-Fitr on Friday.

It was both a somber and joyous affair for residents, most of whom could not yet return to their homes in the 24 villages dubbed the most affected areas, or MAA.

“We’re sad, but what else can we do?” said Juhary Pacasum, who now lives in the Sagonsongan Temporary Resettlement Area.  But they’re happy as well for having survived the fasting during the holy month of Ramadan even under difficult circumstances, he added.

Junader Radia, whose family also shares a home at the temporary resettlement area, said their only consolation was that a lot of people and groups helped them during their ordeal. “We were not totally forsaken,” she said.

In Sagonsongan, more than 400 individuals prayed inside a newly built mosque.

“At least, we did not have to go to another area to hold our prayer,” said Hadji Abdullah Mohaimen, who was originally from East Marinaut, a village within the MAA which has not been repopulated since the war ended in October. 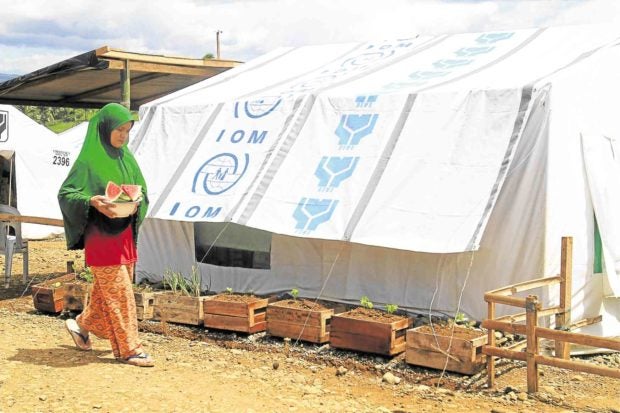 CONTRASTING CELEBRATION A Muslim woman carries her share of food to celebrate Eid’l Fitr at Sarimanok tent city in Marawi.

When the war broke out here on May 23 last year, the residents were still preparing for Ramadan and had to spend the fasting days and Eid al-Fitr in evacuation centers.

“I know we will be able to stand again. We only need to be assisted by the government,” Mohaimen said.

In his message on the feast of Eid al-Fitr, President Duterte praised Allah “for providing our nation the strength to endure the challenges of misguided ideologies, terrorism and violent extremism.”

He added: “May this revered festival inspire us all to foster greater unity amid our differences in faith and culture … Together, let us engage in acts of charity as we steer our nation toward a more progressive and tolerant future,” said Mr. Duterte who was expected to lead the Eid al-Fitr celebration on Saturday evening in Lanang, Davao City.

The three-day Eid al-Fitr is marked by gift-giving, new clothes for children, and a festive look for most homes.  It is also customary for Muslim families to prepare sumptuous meals and share these with guests and neighbors.

In his Eid al-Fitr message to the Autonomous Region in Muslim Mindanao’s four million Muslims, Gov. Mujiv Hataman gave praise for a day of “jubilation and gratitude to Allah, who gave us the strength to overcome our struggles, and to remain righteous as we did.”

At the Mindanao State University oval, a large group of people gathered for the Eid al-Fitr prayers for the first time since the  Marawi City siege ended. 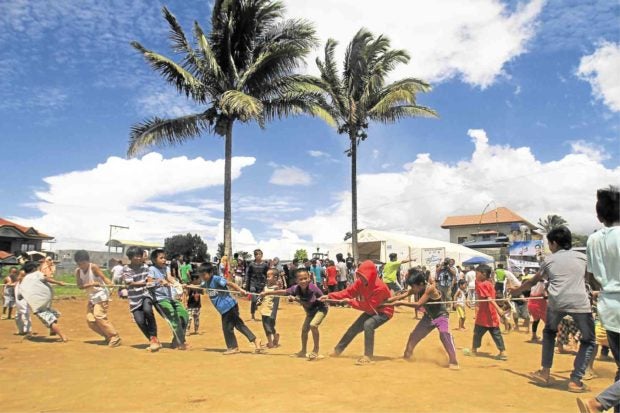 Ulomoden Mamorandsing, imam of Bangon Masjid, preached the Eid al-Fitr message of unity, forgiveness, sharing and acceptance to the will of Allah. “Refrain from violence, do something good,” he urged the residents who were able to pray once more at the Grand Mosque in a kind of reunion.

Ystadz Salih Sarigan, an imam, led the prayers and reminded the community to live by the values instilled by Ramadan, “the values of patience, unity and generosity.”  —WITH REPORTS FROM ROSALIE ABATAYO, JULIE M. AURELIO, RICHEL UMEL, DIVINA SUSON AND ALLAN NAWAL