Trump’s halt of ‘war games’ could weaken defenses in Korea 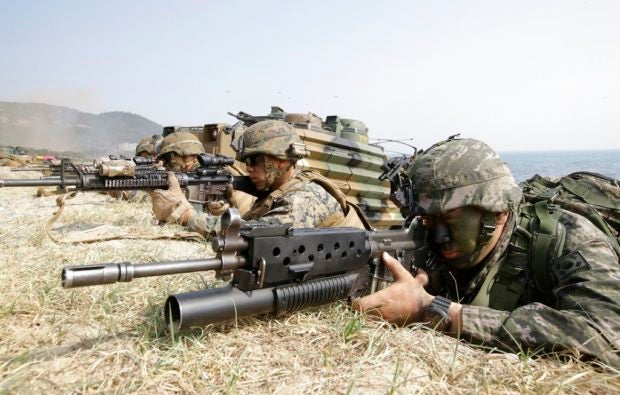 WASHINGTON — President Donald Trump’s decision to suspend major United States military exercises in South Korea could weaken allied defenses, depending on the length and scope of the hiatus. But the potential for diplomatic damage seems even greater.

US, South Korea, and Japan were making a public display of solidarity on Thursday over the outcome of Trump’s summit with North Korea’s Kim Jong Un. But analysts and former officials with experience in US-Asia policy were shaken by Trump’s failure to inform the Asian allies — or even the Pentagon — before mothballing the military maneuvers.

“Those exercises are critically important because they are deterrence,” said Chuck Hagel, a former defense secretary in the Obama administration. He welcomed Trump’s willingness to talk to Kim but worried that the president has underestimated the complications he has introduced for the Pentagon by suspending the military drills.

“You don’t just shut them on and off like a water faucet,” he said.

The exercises in question go well beyond routine training, which apparently is unaffected by Trump’s decision. Large-scale exercises are done to ensure that evolving tactics, procedures, and plans can be carried out smoothly; and that US and South Korean forces are in sync. They are also a means of showing allied solidarity, which is part of the psychology of deterring enemy attack.

US has stationed combat troops in South Korea since the Korean War ended in 1953 with an armistice and no peace treaty. The more than 28,000 US forces serve as a military tripwire against North Korean aggression. The next major exercise with South Korea is known as Ulchi Freedom Guardian; last year’s version was held for 11 days in August and involved about 17,500 US troops.

US has insisted these kinds of drills are defensive measures to demonstrate US and South Korean preparedness to respond promptly to any aggression by the North. But when Trump announced his decision to halt them, he characterized them as “provocative” and as “war games.”

“Those are literally the North Korean and Chinese talking points,” said Christine Wormuth, the Pentagon’s top policy official from 2014 to 2016.

In further explaining his reasons for suspending major exercises, Trump said they “cost a fortune” though even the Pentagon, which foots the bill for US participation in all such maneuvers, has been unable to say what they cost.

Defense Secretary Jim Mattis’ office sent out on Wednesday a request to military commands for cost estimates for the main military exercises held on and around the Korean Peninsula, according to officials who spoke about the request on condition of anonymity to discuss internal communications. In the past, some estimates for smaller exercises have been about $2 million, while some larger ones have cost $15 million or more – all relatively minor expenses for a department with a budget now exceeding $700 billion.

On Thursday, the Pentagon issued a brief statement saying Mattis had discussed the summit outcome with his South Korean counterpart, including what they can work together to “fulfill the president’s guidance” on military exercises.

Michael Green, who was Asia director on the National Security Council staff during the George W. Bush administration, said the likely damage from suspending drills is multiplied by Trump’s failure to inform South Korean and Japanese officials in advance, and his focus on cost-savings. This was then compounded, in Green’s view, by Trump’s dubious assertion on Twitter that North Korea no longer poses a nuclear threat.

“The No. 1 problem with this, geopolitically, is that it suggests to our allies that we are just incompetent, that we don’t recognize the threat,” Green said.

Harry Harris, the retired Navy admiral and former commander of US forces throughout the Pacific, said on Thursday he believes the North’s nuclear weapons still pose a threat but he endorsed Trump’s decision to suspend US military exercises.

“We should give major exercises a pause to see if Kim Jong Un is serious about his part of the negotiations,” Harris said at a Senate hearing to consider his nomination to be US ambassador in Seoul. Harris said the suspension of drills provides “breathing space” for progress in negotiating North Korea’s nuclear disarmament.

Without mentioning that South Korea and Japan were not consulted before Trump suspended drills, Harris said such decisions should not be taken unilaterally.

Senator John McCain, chairman of the Senate Armed Services Committee, called the suspension of drills a mistake, a bad negotiating tactic, and a move that undermines US security.

“We must not impose upon ourselves the burden of providing so-called ‘good faith’ concessions as the price for continued dialogue,” the Arizona Republican said in a statement.

Secretary of State Mike Pompeo, meanwhile, briefed his South Korean, Japanese, and Chinese counterparts on the Singapore summit. At a news conference in Seoul, Pompeo said “staying closely aligned with our allies … will be critical” to success with North Korean denuclearization but he had nothing to say about the suspension of military drills.

The White House has said that the maneuvers were suspended “in a show of good faith,” for as long as productive negotiations with the North continue, and that “regular readiness training and training exchanges” will continue. The Pentagon, however, has remained silent on what Trump meant and has not confirmed it will cancel or postpone the Ulchi Freedom Guardian exercise.

When Ulchi Freedom Guardian was announced last year, US military called it a “computer-simulated defensive exercise designed to enhance readiness.” Also participating were troops from nations that contributed forces during the 1950-53 Korean War, including Australia, Britain, Canada, and Colombia.

In Wormuth’s view, Trump’s stated concern about the cost of such exercises, combined with his talk of eventually bringing all US troops home from South Korea, is likely to create doubt in Seoul and Tokyo about American steadfastness.

“This is going to further erode people’s confidence in our staying power,” she said.   /kga