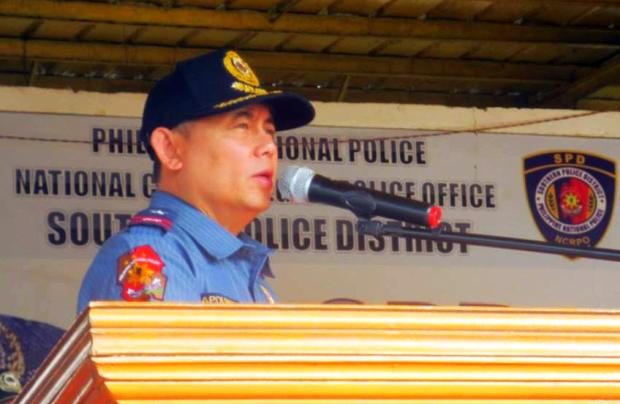 Chief Supt. Tomas Apolinario leads the flag raising at the SPD Headquarters in Taguig on July 25, 2017 (Photo from the SPD Facebook page)

The chief of the Southern Police District (SPD) fired on Friday officials of Taguig and Pateros police stations over their “poor performance.”

Their posts will be concurrently held by the assistant chief of police for administration of Taguig, Supt. Clarence Gomeyac, and Pateros, Supt. Joel Goforth.

Apolinario said the two police officials failed to deliver on the four parameters set by the District Oversight Committee, which is composed of SPD’s top officials.

The four parameters, which were used to gauge the police officials’ performance from January to June, were: “crime solution efficiency, enhanced managing police operations, police community relations and war against illegal drugs.”

Caraguian’s relief was also due to command responsibility for his failure to supervise Chief Insp. Juan Cipriano Jr., who was earlier suspended by the chief of the Philippine National Police himself, Director General Oscar Albayalde.

Cipriano was among the two officials caught by the Inter-Agency Council for Traffic moonlighting as a driver of a colorum (no franchise) passenger van in April.