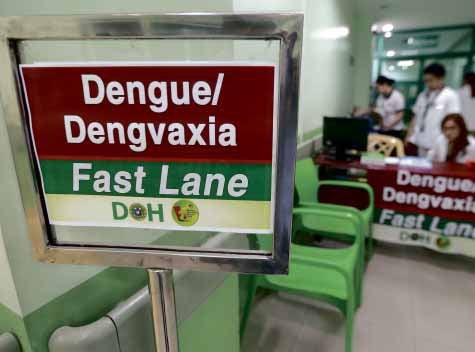 A recent study by international doctors about the effects of an anti-dengue vaccine on recipients who have not yet been affected by the disease agrees with the claims of the Public Attorney’s Office (PAO) against Dengvaxia.

This was the assertion of PAO chief Atty. Persida Acosta, as she cited the study posted on the website of New England Journal of Medicine (NEJM) on Thursday (Philippine time).

NEJM said in its original article titled “Effect of Dengue Serostatus on Dengue Vaccine Safety and Efficacy” that dengue “seropositive patients,” or those who were infected with the dengue virus prior to the immunization of the anti-dengue vaccine, had protection of at least five years.

However, the same study noted, the rates of hospitalization for dengue infection and severe dengue went high among “seronegative patients,” or those who were not infected prior to vaccination.

“Our findings support the hypothesis that, in the absence of previous dengue exposure, the dengue vaccine partially mimics primary infection and increases the risk of severe dengue during subsequent infection,” NEJM said.

The study, which is supported by dengue vaccine manufacturer Sanofi Pasteur, also said that seronegative patients aged nine to 16 years old had higher risks, while those aged two to eight were exposed to significantly higher dangers.

However, Acosta said that even patients with prior dengue infection history are also susceptible to the vaccine’s side effects.

The national anti-dengue vaccination program, worth P3 billion, was a project that commenced during the previous administration. The government, via the Department of Health (DOH), procured “Dengvaxia” from Sanofi Pasteur through its local distributor Zuellig Pharma.

According to the DOH, more than 830,000 individuals, including children, have been vaccinated under the government’s anti-dengue immunization program.

An inquiry by both chambers of Congress has found former government officials, including former President Benigno S. Aquino III, possibly liable for negligence for purchasing Dengvaxia.

Sanofi Pasteur’s vaccines unit Global Head Dr. Su-Peing Ng said on Thursday in a Reuters report that the study would help the company in its future projects.

“With the new data, we now know what is the best way to utilize the dengue vaccine,” Ng said.