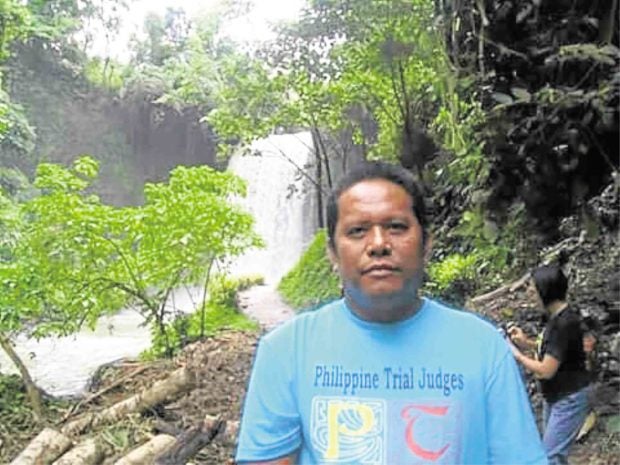 Carpio called on authorities “to take all necessary steps with all deliberate speed to do justice for Judge Begino by fully investigating his killing.”

Sereno thanked authorities for their “prompt action” in the arrest of the suspect, Wilfredo Armea.

Sereno also called on the police to address the “increasing frequency of violent attacks” on members of the judiciary.

“So many lawyers, prosecutors and judges have tasted violent death in the recent years,” she said in a statement.

Sereno described Begino as a “kind and good human being” who “served with idealism.”

A judge of the Municipal Circuit Trial Court of San Jose-Lagonoy in Camarines Sur, Begino led the Philippine Trial Judges League from 2016 to 2017.

Begino, 49, was standing on the street leading to his house, when he was shot by Armea, 72, in Barangay Sta. Maria, around 5 p.m. on Tuesday, said Senior Insp. Maria Luisa Calubaquib, information officer of the Bicol police.

Begino, who was hit by a bullet in the neck, was taken to the town’s Rural Health Unit and later transferred to the Naga Imaging Center Cooperative Doctors Hospital (NICC) in Naga City, but was pronounced dead on arrival by attending physicians.

Senior Insp. Bernardo Peñero, Presentacion police chief, said in a telephone interview that Armea was arrested about 8:10 a.m. on  Wednesday, at a friend’s house in the same village.

Armea did not resist arrest.

Peñero said the motive of the killing was a dispute over an 8-hectare farmland claimed by Armea in Barangay Bicaben also in Presentacion.

Armea told the police he shot Begino because he could no longer draw income from the land he allegedly owned, after Begino’s relatives took over farming chores on the land, which was planted with abaca and other crops.

The Integrated Bar of the Philippines (IBP) in Camarines Sur condemned the killing.

“We call on the police to take necessary and immediate action in order to bring to the bar of justice the perpetrator in the senseless killing of Judge Begino,” said lawyer Ferdinand Diño, IBP Camarines Sur president, in a statement sent to the Inquirer.

‘Parasite’ raises hope of breakthrough for world cinema in US