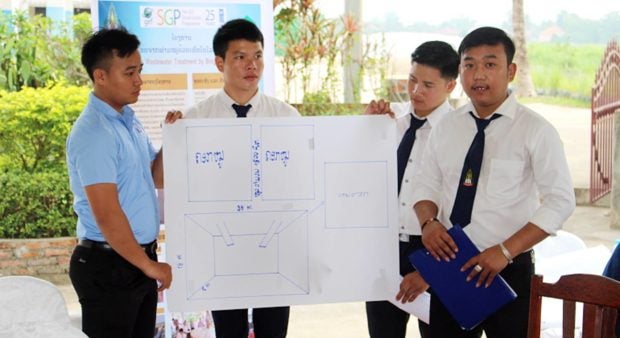 VIENTIANE — Eighteen months ago it was hard to draw a deep breath in Ban Phao village, Vientiane. A pig farm located in the village was creating more than just discomfort. An increasing number of villagers were falling ill from diseases that seemed to be caused by the pig farm’s wastewater polluting the air and ruining fertile land.

“People were having difficulty breathing, which was affecting their health. Even the monks at the village temple were affected”, says the Deputy Head of Phao village, Mrs Senhamphone Paseuthsack. Rice fields didn’t yield as much as before, supposedly due to the wastewater from the pig farm polluting the soil and groundwater in the area.

As the complaints kept coming, it became clearer and clearer that the village needed help to resolve this problem. After reconciliation efforts at the local and district levels failed, the villagers eventually filed a report to the National Assembly about the issues caused by wastewater and demanded that the problem be solved.

“We had to deal with this. Otherwise, I would have to close my business,” Mr Manh Phimphachanh, the owner of the pig farm recalls.

Contacting the National Assembly was clearly the right choice. A link to the Faculty of Engineering from the National University of Laos was made. The faculty had been in search of a site to implement a project that would use modern technology to transform wastewater into biogas that local communities could use for cooking.

As Mr Phimphachanh’s pig farm and his strained relationship with the villagers seemed to provide an ideal setting for the project, he was offered the opportunity to participate in it. As a condition, Mr Phimphachanh would have to provide the villagers with free biogas for the 18 months of the project duration, after which he could start to earn some extra income by selling it to local communities.

Funding for the project was be provided by the Global Environment Facility’s Small Grants Program (GEF SGP) that supports community projects all around the globe tackling key environmental issues. In cooperation with local engineering students, a gas pipe providing 29 nearby houses most affected by the farm’s operation with access to biogas was built from the farm to the village.

The manager of the project, Dr Khamphone Nanthavong from the National University of Laos, was as enthusiastic about the solution his project would provide as the villagers and the farm owner.

“This technology is in wide use in Thailand, where it has been a great success and is very popular among villagers. We even organized a study trip to Thailand for the local village chiefs,” he says. Biogas provides a more affordable and environmentally friendly alternative to charcoal as a source of energy. “The monthly cost of biogas can be up to four times cheaper than the cost of charcoal,” Dr Nanthavong claims.

The 18-month project has just come to an end. Villagers are generally happy that the smell and the negative effects on their health, air and land are gone. But there are still some outcomes to be achieved. While the project’s primary objective of getting rid of the stench of the farm was achieved, none of the 29 households that would have received biogas for free have allowed their houses to be connected to the pipe.

“There are two reasons for this. Firstly, villagers are afraid that the smell of the biogas is as bad as that of the wastewater. Secondly, they are frightened of getting sick from the biogas. Both concerns are of course unfounded,” Dr Nanthavong explains.

Village deputy heads Mrs Thongdeeyalath and Mrs Paseuthsack remain optimistic that the villagers will change their minds with the passing of time. They are convinced that if only a few curious villagers let their houses be connected to the gas pipe, a rapid shift in the attitudes of the rest of the villagers would occur.

While speaking at the closing ceremony of the project, Deputy Resident Representative of UNDP Lao PDR, Mr Balasubramaniam Murali, said that UNDP, GEF SGP’s implementation partner, could kick off this process by organizing an educational campaign in the near future. “This has been a truly unique project involving many actors from various sectors. It would be tragic if the benefits provided by this innovative technology are left unutilized due to simple misconceptions. That is why it is essential that we find a way to explain to the villagers why their reservations about biogas are not true,” he said.

This project serves as a valuable reminder of the fact that technology does not benefit the people unless the people understand its benefits. Now that the air has been cleared from the smells, it is time to start working on clearing up myths about biogas.