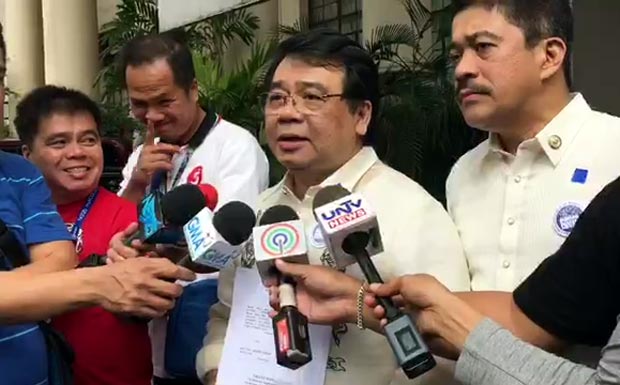 Bayan Muna Rep. Carlos Zarate and party chair Neri Colmenares urged the Supreme Court (SC) on Wednesday to expedite the resolution of important public interest cases, “hopefully with the same haste with which it decided on the ouster case of Chief Justice Maria Lourdes Sereno.”

Colmenares, in a statement, noted how Solicitor General Jose Calida filed the quo warranto petition against Sereno on March 5, 2018, and the high court, “with apparent inordinate speed,” rendered its decision about two months later on May 11, 2018.

But he said the SC “is sitting on many important public interest cases for many months and even years.”

The former lawmaker mentioned filing petitions against China and the Philippines’ joint exploration of Spratly islands on May 22, 2008. But, ten years later, the high court has not decided on Bayan Muna’s petition to disallow China’s access to the country’s territorial sea through a supposed joint exploration with the government.

He further said in Jan. 6, 2015, they filed another petition against the fare hike imposed by MRT and LRT, which the SC has yet to act upon.

For his part, Zarate called on the high court to resolve other consumer issues pertaining to public utilities.

On Sept. 19, 2017, Bayan Muna also filed with the SC a petition for Smart and Globe Telecom to refund billions of pesos it allegedly overcharged for the text messages of subscribers.

Other “unresolved” petitions filed by the militant group, Zarate said, were those against water rate hike, the Tax Reform for Acceleration and Inclusion (Train) Law and the TRO on the Retail Competition Open Access(RCOA).

Colmenares also asked the Court to prioritize cases involving anti-people policies of government that affects millions of Filipinos and “not the wishes of a single man to remove the Chief Justice.” /cbb