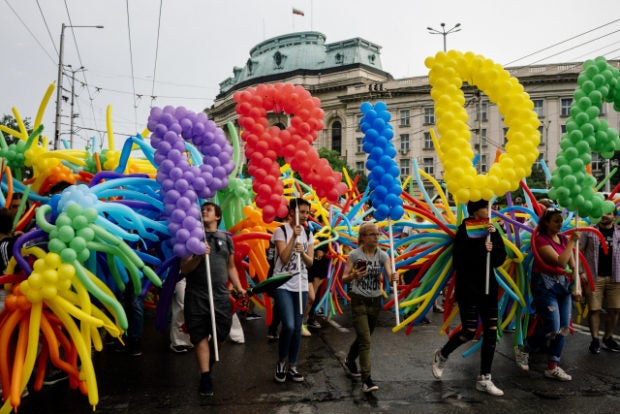 Thousands of people took to the streets to support LGBT rights in cities across Europe on Saturday, with marchers waving rainbow flags and condemning discrimination in all its forms.

In Bucharest, some 3,000 people marched through the city center with many celebrating a ruling made by the EU’s top court earlier this week.

The European Court of Justice ruled in favor of Romanian gay man Relu Coman’s right to have his US husband Robert “Clai” Hamilton live with him in Romania.

“Clai and I are two people who did not accept discrimination. If more of us did the same, the world would be better,” Coman told AFP at the march.

Romania does not recognise same-sex marriage and had argued that Hamilton was not entitled to EU residency rights awarded to spouses.

The European court ruling means that same-sex partners of EU citizens have the right to live in any member state whatever their nationality, even in countries that do not recognise gay marriage.

In Warsaw, tens of thousands marched for the annual “Equality Parade” to protest discrimination not just against LGBT people but also women, ethnic minorities and people with disabilities.

“I come from a small town and first marched for equality 10 years ago, without telling my parents,” Dominika Wroblewska said at the Warsaw parade.

“It’s very moving for me, especially since I came out a year ago,” she said.

Her partner Alicja Nauman said she was marching “because I want to live in a place where all love is accepted, because love knows no boundaries.”

“The situation in Poland is bad because same-sex couples cannot marry or adopt children,” Nauman added.

Thousands, including members of a LGBT police association, also turned out for the 14th edition of Gay Pride in Athens.

The Athens events had previously been largely shunned by institutions and notably harassed by far-right groups, but this year’s edition was attended by a delegation from the liberal-conservative New Democracy party.

Not to be outdone, the facade of parliament, overlooking Syntagma square at the heart of the festivities, was symbolically lit up in all colours of the rainbow in a government initiative.

Since the leftist government took office in  2015, Greece has extended civil partnerships to same-sex couples, authorised sex changes from the age of 15 and legislated for children to  be adopted by same-sex partners — though New Democracy voted against the reforms which the powerful Orthodox Church also opposes.

One of the organisers, Kaspars Zalitis, told AFP that about eight thousand people marched.

“Latvia is in last place in the European Union when it comes to the rights of LGBT people,” Zalitis said.

“There is no protection against hate crimes, no respect for trans people, that’s why we think this issue is greatly urgent.”

About 30 people protested before the start of the parade in Riga, following a call by a rightwing group for a demonstration against “the promotion of homosexuality”.

“It’s very important that we’re here, because we need to respond and show that it’s not true that we don’t exist,” said Andrea, 27. MKH