BOLINAO, PANGASINAN-For three decades now, the shallow reef surrounding Silaqui Island in the northernmost tip of this town in Pangasinan province has been a silent witness to the growth of thousands of giant clams, locally known as "taklobo."

The reef is where the baby giant clams are released to grow to adulthood after spending five months in a hatchery at the Bolinao Marine Laboratory (BML) of the University of the Philippines Marine Science Institute (UPMSI).

From a few breeders reared from larvae and juveniles imported from the Solomon Islands and Australia in 1987, it now boasts of 35,684 adults and 11,209 juveniles, making it the country's largest giant clam sea nursery.

As a result, the nursery has been the source of 50,000 giant clams now thriving in more than 60 sites all over the country, saving these from impending extinction.

"If you go to Anilao in Batangas [province] or Davao, most of the big clams there came from here," said Dr. Cecilia Conaco, BML deputy director. "Many more are requesting us to restock in different reef areas. So we've kept up to the restocking."

How to take care of giant clams. Video by Noy Morcso and Rem Zamora. Editing by Noy Morcoso.

Despite the significant rise in population, giant clams have remained endangered, Conaco said. It is still illegal to gather and possess them for trade, she added.

Giant clams are also among the creatures listed in the Convention on International Trade in Endangered Species of Wild Flora and Fauna, an international agreement between governments aimed at ensuring that international trade of wild animals and plants does not threaten their survival.

"They're still very vulnerable to extinction. The Tridacna gigas (the biggest among the giant clams), was locally extinct. It still is in many areas in the Philippines. That's why it is the focus of our conservation project," said Conaco. 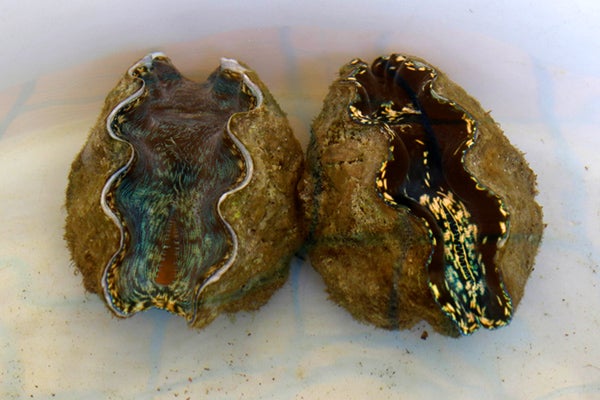 Eight of the existing giant clam species in the world are found in the Philippines. Six are being cultured at the BML. These include the Tridacna gigas, Hippopus hippopus, Tridacna derasa, Tridacna squamosa, Tridacna maxima and Tridacna crocea.

According to Conaco, saving the giant clams is important because they help form the coral reef structure, aside from providing shelter to corals and fish.

"They are also filter feeders. They help filter the water, recycle nutrients and provide food and habitat for other organisms," she said.

The move to save the giant clams came about after a huge drop in the their population was noted in the 1980s due to the indiscriminate gathering by residents in coastal villages for food and shell craft.

UPMSI founder and former director, Prof. Edgardo Gomez, launched the giant clam project, where marine scientists developed techniques and built facilities for the culture and rearing of these clams.

The culture begins in the ocean nursery by inducing the giant clams that are 8 to 10 years old, to release sperm and eggs. These are then gathered and brought to the BML hatchery, where they are first put in larval rearing tanks and, after eight days, in concrete settlement tanks.

"We take care of them [for about five months] until they grow to about 5 centimeters (cm) in size. Then we bring them back out to the ocean nursery to enable them to grow faster," Conaco said.

Because they are vulnerable to predators, such as crabs and puffer fish, the juveniles have to be put in cages once they are transferred to the nursery, she said.

They are freed from the cages and laid on the seabed only when they grow to about 20 cm in size.

Despite the success in bringing back the giant clam population, the project is still trying to hurdle certain challenges, according to Conaco.

"The big challenge I think is really getting the funds to get the personnel to take care of the clams," she said.

With the number of giant clams that they now have, many workers are needed to clean and take care of the clams and to bring them to the nursery. Algae had to be removed from the shells of the juveniles to enable them to get maximum sunlight and hasten their growth.

"Since we do not have much funding, so basically we just leave the clams to fend for themselves," Conaco said. 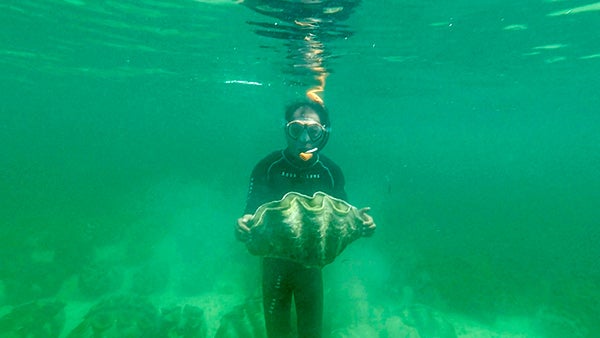 At present, the giant clams are under the care of Julio Curiano Jr., BML administrative aide, who is also in-charge of the ocean nursery maintenance and stock enhancement.

"The other thing is, the nursery is far away from [BML], and we do not have anybody watching over it. So, at times, we lose some clams," Conaco said.

Silaqui Island, which is part of Barangay Binabalian, one of the villages of Bolinao's Santiago Island, is a sparsely populated community that is 30 minutes away by speed boat from the BML.

"But we would like to be more proactive in reviving the project and starting the production once again to spread the stocks [all over the country]," Conaco said.

The country's giant clam population, she said, should reach a level where giant clams are able to multiply on their own. "We need to have a population where the egg and sperm will find each other in the water to become baby clams," she said. 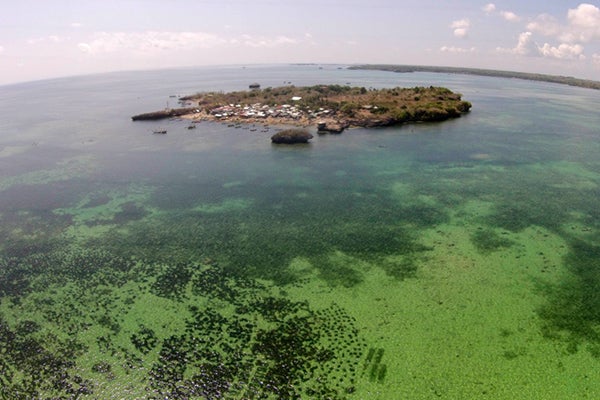 Silaki Island in Bolinao, Pangasinan. The reef near the island serves as the nursery for Tridacna gigas, commonly known as giant clams mamnaged by the Bolinao Marine Laboratory. Photo by: Rem Zamora

The BML is now trying to work with the Bolinao town government to find a way to involve the Silaqui community in taking care of the giant clams, especially now that the nursery is being visited by tourists.

"We want tourists to enjoy the clams, to learn about these, but at the same time, we want to make sure these are protected by not touching or stepping on these," Conaco said.

"It's a big effort and I think one of the promising things is that Bolinao [council] has passed an ordinance declaring the town as 'Giant Clam Capital of the Philippines,'" she added. 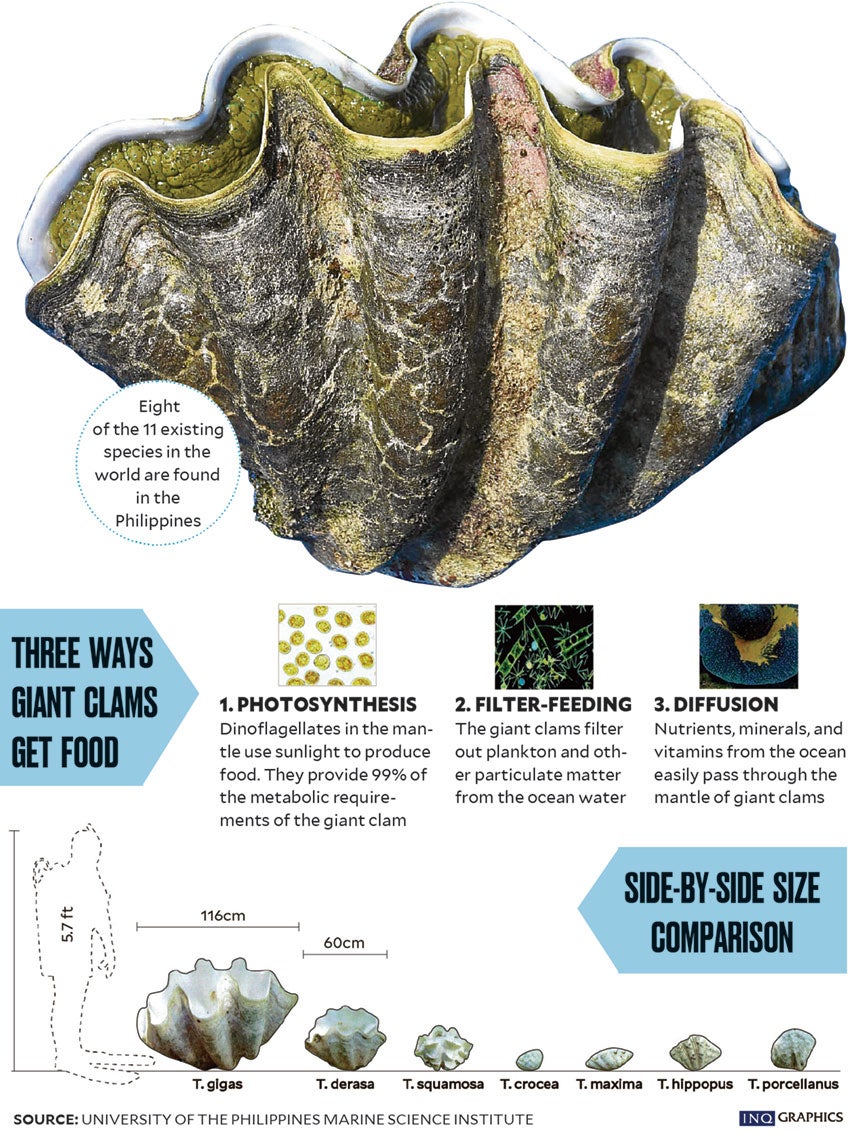 READ: A day in the life of a giant clam nursery worker