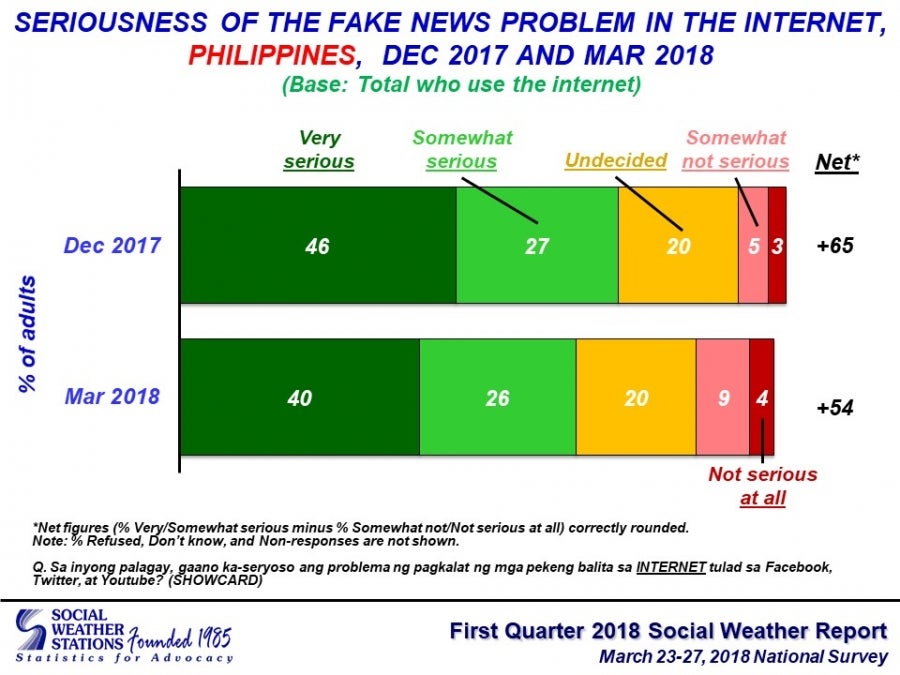 A recent survey revealed that 67 percent of Filipinos who use the internet said there is a serious problem with the proliferation of fake news within online sites, while 60 percent expressed grave concern for mass media sites.

Social Weather Stations (SWS) said on Monday that of the 42 percent or at least 44 million Filipinos who use the internet on a daily basis, at least 29 million said in March 2018 that fake news is a serious problem.

However, the number of netizens who consider fake news in the internet as a serious problem dropped, as December 2017 numbers were at 73 percent.  Also, the +54 net score for the first quarter of 2018 is eleven points below than the previous +65 score.

SWS said more netizens in Metro Manila and Balance Luzon perceived fake news in the internet as a serious problem at 71 percent, with 68 percent in Visayas and 52 percent in Mindanao

More college graduates also believe that fake news is proliferating (76 percent), compared to high school graduates and below (54 to 67 percent).

The SWS survey also revealed that 60 percent of adult Filipinos believe that the problem of fake news in mass media is serious (29 percent very serious, and 31 percent somewhat serious).

Of the 60 percent, 27 percent were undecided and 13 percent said that it was not serious.

In retrospect, 61 percent said that the current administration is serious when it comes to solving the fake news problem in media (32 percent very serious, 30 percent somewhat serious).

Among the respondents, 31 percent were undecided while eight percent said that it was not serious in battling fake news in mass media.

SWS maintains the sampling error margins of ±3% for national data, and ±6% for each locale.  /muf