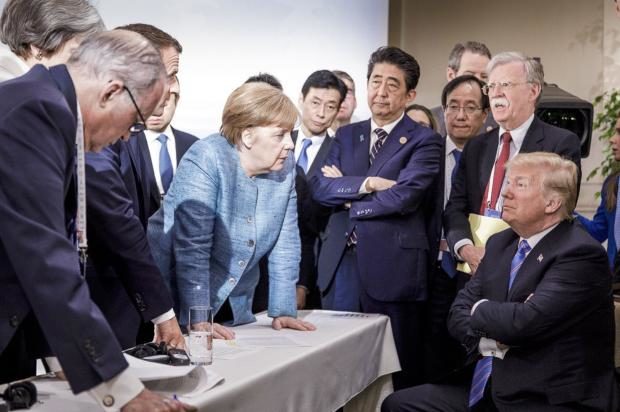 In this photo made available by the German Federal Government, German Chancellor Angela Merkel (center) speaks with US President Donald Trump (seated at right) during the G7 Leaders Summit in La Malbaie, Quebec, Canada, on Saturday, June 9, 2018. AP

BERLIN  — German Chancellor Angela Merkel’s spokesman isn’t offering any advice on how to interpret a government photographer’s viral shot of the Group of Seven summit. He’s stressing that any impressions are “in the eye of the beholder.”

Spokesman Steffen Seibert tweeted the picture by German government photographer Jesco Denzel on Saturday. It shows a standing Merkel, hands firmly planted on a table, staring down at President Donald Trump, who is seated with his arms folded.

Seibert told reporters in Berlin Monday that his office “is connecting no interpretation” with the picture.

He added: “This is one scene from the discussions. The photographer had only very brief access to these discussions, and so we only had very few pictures, which were all very similar.”

Seibert noted that “other photographers captured other scenes.”