29 drug suspects nabbed in Pasig over the weekend 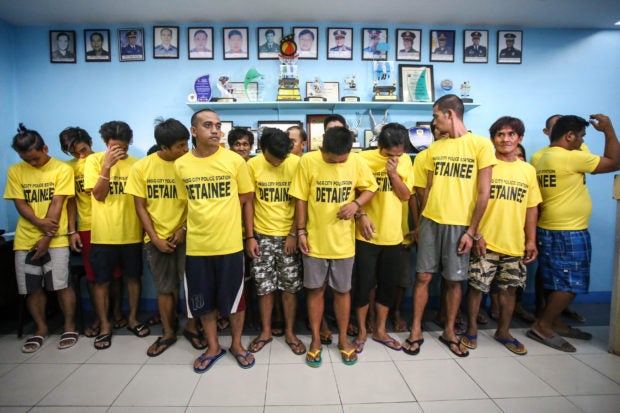 Senior Supt. Orlando Yebra, city police chief, said it was their biggest haul under one “intensified and focused” anti-drug operation since the crackdown on illegal drugs began almost two years ago.

The police official noted that the arrests were the result of the coordinated efforts of all units and 10 community precincts in Pasig against drug suspects who may have thought that the floods would deter the police.

A report to Chief Supt. Reynaldo Biay Jr., director of the Eastern Police District (EPD), said seven suspects, including a 17-year-old, were arrested during an alleged drugs session inside a restroom in Viajeros Market, which is located near the district headquarters.

Most of the suspects reportedly work long hours as porters and vendors in the market in Barangay Malinao. Police said they were arrested around 10 p.m. on Saturday.

“Most of these suspects had previously surrendered, but were monitored to have returned to dealing and using illegal drugs,” Yebra told reporters in a press briefing on Monday.

Under the government’s “Oplan Tokhang,” which began in July 2016, drug users and peddlers were encouraged to turn themselves in for recovery and rehabilitation. Thousands had since surrendered, but the sheer number of drug dependents had overwhelmed the government, which was caught off guard with no comprehensive recovery program for surrenderers.

Heavily criticized, ‘Tokhang’ has also been linked to the Philippine National Police’s anti-drug operations that has resulted in thousands of deaths.

In Pasig City, at least 14,000 drug users and pushers had since surrendered, but only 458 have completed the community-based rehabilitation program, the Inquirer learned.

After two years of the anti-illegal drugs campaign, Yebra said curbing the drug problem remains a challenge in the city. Out of 30 barangays, only nine have been declared “cleared” from illegal drugs, based on parameters set by the Department of the Interior and Local Government (DILG).

Yebra maintained that the “shabu tiangge” in Pasig was not revived.

In 2006, police raided an infamous one-stop-shop for drug deals along F. Soriano Street, which is a stone’s throw away from the city hall. Authorities arrested Amin Imam Boratong, the shop owner.

Boratong, along with his wife Sheryl, was sentenced to life imprisonment in 2009. /ee