‘Domeng’ exits, but rains to continue over Luzon 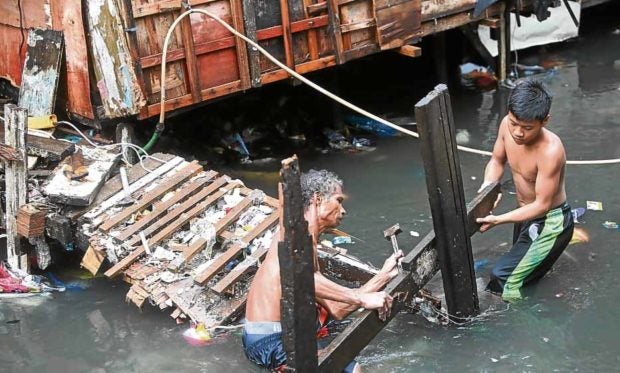 SWOLLEN CREEK People living along a creek in Santa Cruz, Manila, repair a makeshift footbridge that has been damaged by floods during an overnight downpour brought about by Typhoon “Domeng” on Saturday. —MARIANNE BERMUDEZ

Luzon will still experience monsoon rains that could cause floods and landslides despite the exit of Typhoon “Domeng” (international name: Maliksi) from the Philippine area of responsibility (PAR) on Sunday morning, according to the weather bureau.

The southwest monsoon (locally called “habagat”), which Domeng enhanced, will continue to bring rain over Luzon, particularly in the western part, according to the Philippine Atmospheric, Geophysical and Astronomical Services Administration (Pagasa).

As of Sunday, the National Disaster Risk Reduction Management Council (NDRRMC) had recorded one death from the typhoon—that of a 27-year-old resort employee in Palawan.

As of 3 p.m. on Sunday, Domeng was 1,295 kilometers northeast of Basco, Batanes. It was expected to move farther northeast at 30 kph, according to Pagasa.

The NDRRMC said the body of resort worker Algemon Nuñez was found around 8 p.m. on Friday on the shore of Barangay Corong-Corong in El Nido, Palawan.

Nuñez went missing after his Jet Ski was toppled by waves. His coworkers, the Philippine Coast Guard and the local police immediately conducted search-and-rescue operations.

Nuñez’s body drifted ashore and was discovered by a tourist. It was later positively identified to be that of Nuñez.

While Domeng had moved away from Mindanao, thunderstorms and low-pressure areas were expected to dump rains on parts of the island, according to Pagasa.

Ramos said that as of June 6, the agency had managed to preposition 64,000 food packs. There was also a standby fund of P3 million to help local governments respond to disaster operations.

Misamis Oriental Gov. Yevgeny Emano said mayors had been authorized to suspend classes in their areas in the event of weather disturbances.

“We leave it up to them since they know more the situation in their areas,” Emano said.

Mayors in the towns of Initao, Gitagum and Manticao used their executive powers when they suspended classes in their localities on Wednesday, said Fernando Dy Jr., head of the Provincial Disaster Risk Reduction and Management Office.

Northern Mindanao had its share of killer floods in recent years, including Tropical Storm “Sendong” (international name: Washi) in 2011 and Typhoon “Pablo” (Bopha) in 2012, displacing hundreds of thousands of people and killing more than 2,000.

In January last year, seven people died in floods and slides in the cities of Cagayan de Oro and Gingoog, and in the province of Misamis Oriental and Bukidnon. —With a report from Jigger J. Jerusalem