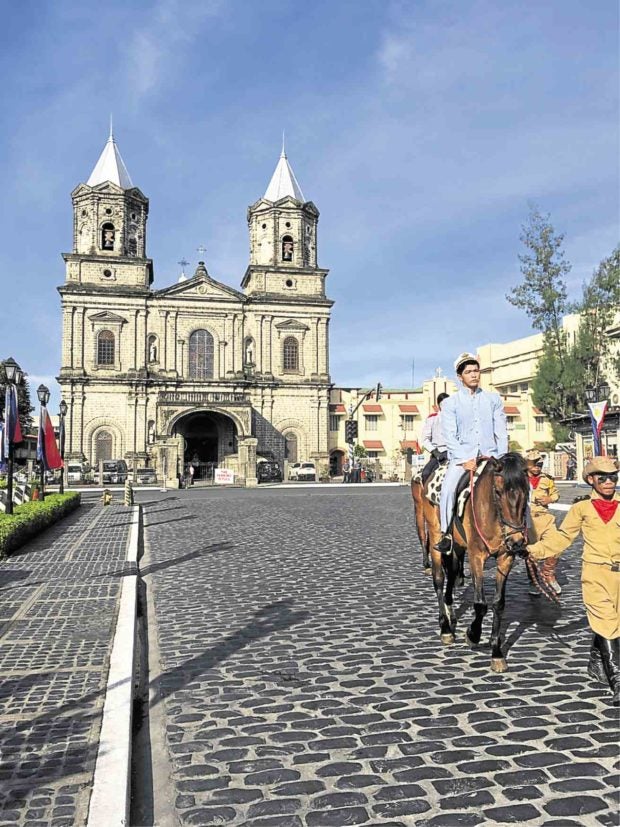 CORRECTING HISTORY The Holy Rosary Church in Angeles City was confirmed to be the venue of the first anniversary celebration of the Philippines’ declaration of independence from Spain. —TONETTE OREJAS

ANGELES CITY — For the first time since 1898, the Holy Rosary Church here has been included in Independence Day celebrations on June 12.

The National Historical Commission of the Philippines (NHCP) had installed markers stipulating that this old Augustinian church was where the first anniversary of the 1898 declaration of Philippine independence from Spain had been celebrated.

Previous accounts erroneously named the Pamintuan Mansion here, where Emilio Aguinaldo stayed, as the venue of the celebration.

For Independence Day rites on Tuesday, a unity parade will start at the Pamintuan Mansion and proceed to Holy Rosary Church.

To honor the relevance of this part of the city’s heritage district, a city council resolution approved the installation of a flagpole at the Sapang Balen Bridge.

The 1899 activities at the church would be replicated, said John Montances, city tourism officer.

Mass to mark the first anniversary in 1899, a speech given by Aguinaldo and luncheon for soldiers were held at the church courtyard, according to reports in La Independencia, the newspaper of the Philippine Revolution.

Venancio Concepcion gave the same accounts, which justified the corrections that NHCP made in 2017 at the request of Francis Musni, archivist of the Holy Angel University’s Center for Kapampangan Studies.

The Pamintuan Mansion had served the headquarters of Antonio Luna.

Aguinaldo witnessed a military parade from the mansion on the eve of the anniversary celebration. He had planned to make Tarlac the seat of the Republic in June 1899.

Independence Day rites had been held at the Pamintuan Mansion for 17 years but national leaders started gracing these events only in the last six years.

In 2012, Musni found accounts in the June 14 and 15, 1899 editions of La Independencia about the celebration in the church.

The June 14, 1899 story, titled “La Fiesta Nacional (National Holiday),” reported: “On Monday morning (of June 12, 1899), a solemn outdoor Mass was celebrated in the town of Angeles commemorating the anniversary of the proclamation of national independence.”

The paper said people cheered and “a lot of enthusiasm and cordiality reigned on that day among the participants.” The troops were served “an extraordinary feast.”

The next day, La Independencia featured a letter written by an editor that described the eve of June 12, 1899 as “a golden date that must not be forgotten.”

Marching bands from the Pampanga towns of Porac, Magalang, Sta. Rita and Angeles arrived on June 11, 1899, to greet Aguinaldo at his residence (the Pamintuan Mansion) and play the national anthem before marching on the main streets of Angeles, according to the editor’s account.

There was no mention of the unfurling of the flag, which was among the highlights of reenactment at the mansion.

Instead, the letter reported: “As they passed through the streets, the banner of the Motherland was warmly cheered by the immense crowd that overflowed the streets and by the marching bands that launched into the air the gallant melodies of our national march.

“Before being taken to the headquarters, the flag was
taken to the palace of the President, and was once again greeted by the music and by a picket line of soldiers.”

Two bands, positioned in front of the Pamintuan Mansion, played the “most exquisite repertoire of selected pieces” until 10 p.m.

Both accounts suggested that the venue of the first anniversary celebration was larger than previously thought and was not confined to the mansion built by Mariano Pamintuan in the 1890s as a gift to his son, Florentino.