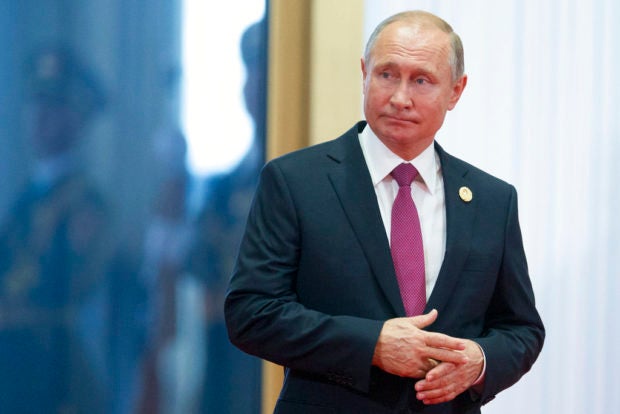 Putin, speaking to reporters in Qingdao, China, where he attended a summit of the Shanghai Cooperation Organization, said he agreed with Trump’s expressions of concern about a renewed arms race. Putin added that a thorough discussion is needed to address the issue.

Putin said that some nations, including Austria, have offered to host his summit with Trump.

Putin’s remarks follow a report that White House officials were working toward setting up a meeting. Trump has said he was open to having a summit with Putin, who US intelligence officials have said directed Russian meddling in the 2016 election to help Trump win.

The American leader has repeatedly said he wants to improve relationships with Moscow.

Earlier Sunday, Putin criticized the US withdrawal from the Iranian nuclear deal in a speech at the summit.

He emphasized that the bloc’s members, who also include China, four ex-Soviet Central Asian nations, as well as India and Pakistan, are worried about the US move.

Putin said that Washington’s decision to exit the agreement could “destabilize the situation” in the region. He added that Moscow will continue to honor its obligations under the Iranian nuclear deal.

Last month, Trump pulled out of former President Barack Obama’s landmark 2015 nuclear accord with Iran over the objections of European allies and other nations.

Addressing the summit, Iranian President Hassan Rouhani, whose country has an observer status in the group, said that Iran would expect other participants in the nuclear deal to provide guarantees that they would honor the agreement.

Founded in 2001, the Beijing-based SCO has largely served as a vehicle for resolving border issues, fighting terrorism and — more implicitly — to counter American influence in Central Asia following its invasion of Afghanistan. /ee

Read Next
Prosecution chief inhibits from handling Okada cases
EDITORS' PICK
In Borongan, nuns play hoops (not mahjong)
PH resumes talks with China on Chinese-funded transport projects
Powered by style, innovation and passion
Why Tagle is a leading papal contender
House energy committee chair Arroyo bats for cheap electricity
A laptop that maximizes your WiFi so you can maximize your productivity
MOST READ
Imee Marcos bares illegal importation of white onions
Why Tagle is a leading papal contender
Vico Sotto undergoes procedure for knees
Ogie Alcasid positive for COVID-19: ‘We keep ourselves protected and yet inabot din’
Don't miss out on the latest news and information.