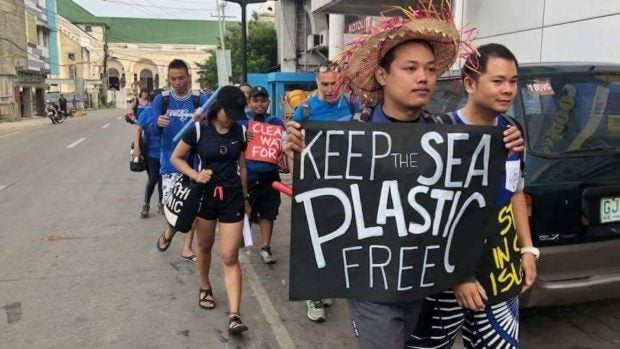 Boholano environmental advocates march 19 kilometers from Tagbilaran to Alona Beach in Barangay Tawala in Panglao town on Saturday to raise awareness to the worsening threats to the world’s oceans and seas. Contributed Photo/Liza Macalandag

PANGLAO, Bohol — At least 65 environmental advocates marched 19 kilometers from Tagbilaran to Alona Beach in Barangay Tawala in Panglao town on Saturday to raise awareness on the worsening threats to the world’s oceans and seas.

The event, locally named “Baktas Alang Sa Kadagatan” (March for the Ocean), took its cue from the USA’s “March for the Ocean,” which was set on Saturday and replicated globally, which advocates for the same intensified action to protect the oceans.

The volunteers carried hand-painted pro-ocean anti-plastic placards and hardy eco-warrior hearts to echo the call for the ban of single-use plastics, reduction of all forms of ocean pollution, corporate accountability for plastic pollution, and the protection of vulnerable coastal communities.

According to Liza Macalandag, who is one of the organizers, Bohol’s “Baktas” especially highlighted the fight for more stringent regulations in the use of single-use plastics and the call for better waste management infrastructure and services in the province. 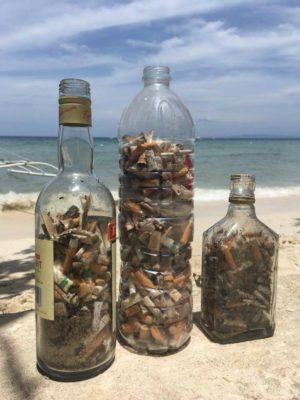 Plastic pollution in Bohol has been in the spotlight of late, as local governments have begun to take critical strides in controlling plastic use with the implementation of plastic bag bans, first in Jagna and Maribojoc, and of recent, in Tagbilaran City and Alburquerque.

The group — composed of environmentalists from various sectors: students, nurses, doctors, musicians, artists, etc. – began the 19-kilometer march at 6:15 a.m. on Saturday at Plaza Rizal. From there, they proceeded towards Mansasa Junction, crossing Panglao Island via the Jacinto Borja and Vaño Bridges in Poblacion, Dauis town, then through the Catarman-Biking Dauis road and towards Tawala, Panglao.

They arrived on Alona Beach at 11 a.m. where they were met by other hundred volunteers for the Alona Beach Cleanup, organized alongside the march.

Panglao Island is facing environmental violations such as resorts with no septic tanks and proper waste disposal facilities.

Secretary Roy Cimatu of the Department of Environment and Natural Resources (DENR) has given six months for resort owners to remove illegal structures and clean the area.

The one hour beach clean-up on the Alona beach stretch yielded about 8.7 lbs (approx. 4 kilos) of cigarette butts alone. More kilos of common trash were gathered along the beach such as soft drinks and alcohol bottles, as well as plastic food packaging.

Plastic Free Bohol, the lead organizer of the march, hosts regular beach cleanups to not only clear the beaches of debris and trash but to promote awareness on plastic pollution and advocate for green consumerism and the banning of single-use plastics.

“Baktas Alang sa Kadagatan” was co-organized by the Bohol Climate Walkers and supported by the Panglao LGU. /je