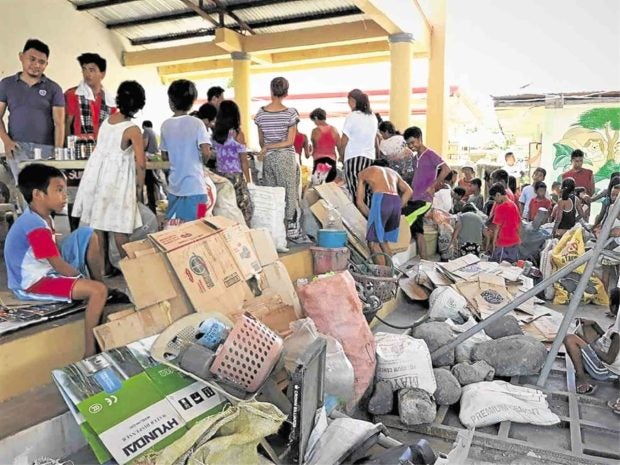 ‘GARBAGE’ IN, GROCERY OUT Ligao City residents line up to barter sacks of recyclable materials for food and other items, under a waste management scheme targeting households not regularly reached by trash collectors. —MICHAEL JAUCIAN

LIGAO CITY — Residents in this city know better than to indiscriminately dump their household trash, what with the city government’s latest incentive program meant to help manage solid waste, encourage recycling and ban the use of plastic bags.

Under the system, recyclable trash are assigned a certain number of points that residents can record in their “passbook.” The grocery items and school supplies are also given a corresponding equivalent in points.

To qualify for the project, Perillo said residents should be registered in their barangay and should avail themselves of the passbook so they can record points gained for the recyclable trash that they surrender.  The points may be redeemed in canned goods or school supplies.

For example, a resident who has 39 points may get a big can of sardines, while 21 points may be exchanged for three packs of instant noodles.

The city government will facilitate the recycling of the collected materials into handicraft or household items.

The program is also a way of educating the public on how to dispose their household wastes, Perillo said.

Before the incentive mechanism was put in place, this city had started the full implementation of the ban on plastics in 2016 in accordance with an ordinance authored by its late Vice Mayor Jorlan Guanzon. Violators are penalized through citation tickets.

“We have a total of 120 violators since 2016 who were penalized for violating the ordinance, most of them businessmen,” Perillo said, adding that violators had to pay fines ranging from P1,000 to P5,000.

A ban on the use of Styrofoam was also being considered.

While the wet market was allowed to use small plastic bags for fish and meats, the bags were for single use only, the pollution control officer said.  At the dry goods section, the use of plastic bags was strictly prohibited, Perillo said.

Establishments were also obliged to display ecobags to give consumers a choice, he added.

The city government has distributed 100 units of bayong (woven reed bags) that can be reused to show that environment-friendly containers are easily available.

Read Next
De Lima: I filed 22 bills even in jail
EDITORS' PICK
COVID-19 cases in NCR, nearby provinces now going down — OCTA
I’ll fight evil and misdeeds no matter what it takes—Guanzon on BBM party’s disbarment threat
PH records over 18,000 new COVID-19 cases for 2nd straight day
NUSTAR Resort and Casino: Cebu’s next lifestyle and leisure gem
Rise to perfection: Spot on tiles for your stair risers
Step up your vlog game with vivo’s newest smartphone
MOST READ
Palace: Facility quarantine no longer required for fully vaxxed travelers starting Feb. 1
6 areas to be placed under Alert Level 3 from Jan. 28 to Feb. 15
Fully vaxxed nationals of non-visa required countries allowed entry to PH starting Feb. 10
Leni mansplained? Abunda ‘interruptions’ stir own buzz
Don't miss out on the latest news and information.