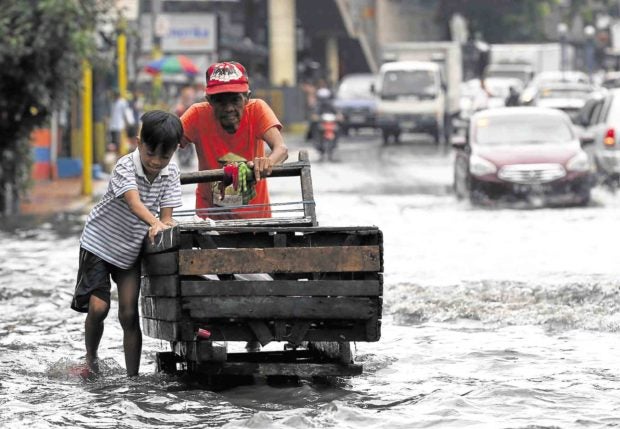 TOUGH TERRAIN A boy takes a break from playtime in the flood to help an elderly man push his cart through an inundated area on Nueve de Febrero Street in Mandaluyong City.—LYN RILLON

The agency added that a portion of East Avenue in front of the National Kidney Institute and a segment of the southbound lane of Edsa-Tramo Street in Pasay were also affected by gutter-deep floodwaters.

The MMDA, however, said that all affected roads were passable to light vehicles.

The Philippine Atmospheric, Geophysical and Astronomical Services Administration (Pagasa) said that the heavy rains hitting Metro Manila and other provinces were triggered by the southwest monsoon that was exacerbated by Domeng.

Pagasa promptly issued an orange warning for Cavite, while a yellow warning has been raised all over Metro Manila, Zambales, Bataan, Batangas, Bulacan, Pampanga, Laguna and Rizal.

The weather bureau said that flooding was possible in those provinces, especially in low-lying areas.

According to Pagasa’s color-coded rainfall advisories, a yellow warning (or heavy rainfall) means flooding is possible in low-lying areas and areas near rivers, while an orange warning (intense rainfall) indicates that “flooding is threatening” to hit affected communities.

As of 3 p.m. on Saturday, the center of the severe tropical storm was estimated at 640 kilometers east-northeast of Basco, Batanes, with maximum sustained winds of 90 kilometers per hour near the center and gustiness of up to 115 kph. It was forecast to move north-northeast at 27 kph.

Nikos Peñaranda, Pagasa specialist, said Domeng was expected out of the country by Sunday morning and its effect on habagat will weaken.

By Monday, Domeng will head to a north-northeasterly direction as it leaves Philippine area of responsibility. —With a report from Melvin Gascon