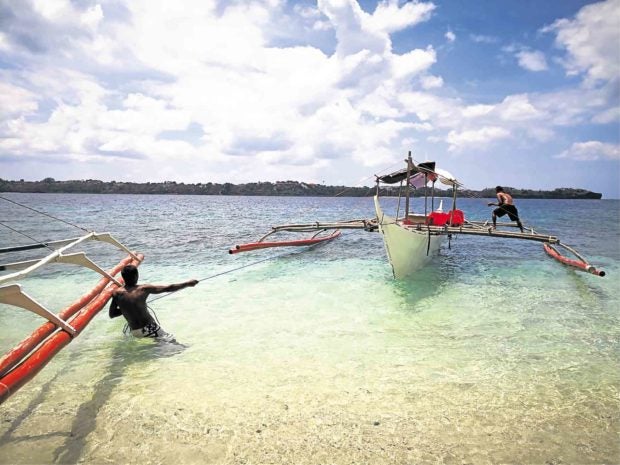 BATANGAS CITY — In a tourism summit last year, Gov. Hermilando Mandanas proposed to tweak the province’s tourism pitch by inserting the word “rich,” if only to capture its full offering.

A bustling industrial hub on the outskirts of Metro Manila, the province is also home to natural wonders — mountains and ridges, farms, diving spots, beaches, and the famed Taal, an active volcano in the middle of the lake.

“So we came up with ‘rich Batangas,’” Marasigan said. “But [the] problem was how do we explain it [to tourists]? It (Batangas) is just too big,” she said.

Marasigan said the 34 towns and cities were clustered by their “common interest” to create a tourism loop, so adjacent places with established attractions could help promote the emerging ones.

The “lake cluster,” with Taal volcano as focal point, has 11 towns and cities, while the “inland cluster,” with farm tours as main attraction, has eight.

Nasugbu is one of Batangas’ popular beach towns. From Manila, one can take the bus from Buendia or Pasay terminal or drive via Tagaytay Road or the Kaybiang tunnel from Cavite province.

There are several beach resorts, but people recently have discovered fun in island-hopping.

Off Barangay Calayo, a boat (P1,500 for groups) takes you on a 30- to 45-minute ride to a cove called “Pulo Island.” There are no facilities, but tourists can frolic all day on its semiwhite sand beach.

From Nasugbu, an hour ride via bus or jeepney (terminal at Lian’s public market) is Calatagan, which offers a better view of the ocean “65 steps” up the Cape Santiago Lighthouse at Barangay Bagong Silang. 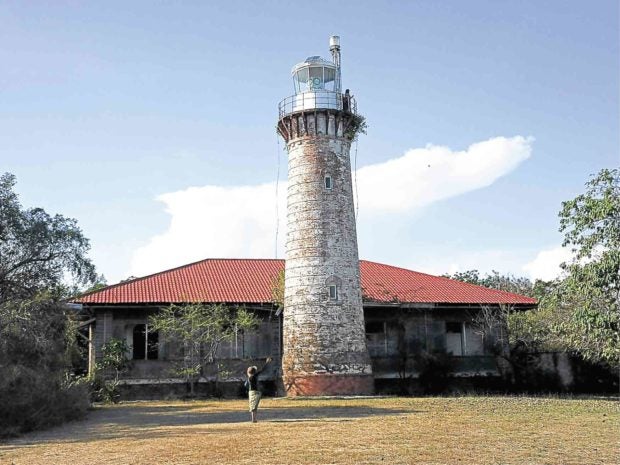 Cape Santiago Lighthouse in Calatagan is a national historical site.

The lighthouse was built on Dec. 15, 1890. It remains operational under the management of the Philippine Coast Guard and is open to visitors, said Julie Anne Dino of the municipal tourism office.

From Cape Santiago, about 15 minutes away is the Zobel Museum.

The community museum was built in honor of tycoon and philanthropist, Don Enrique Zobel, whose family used to own haciendas in Calatagan. The museum features the family’s memorabilia and local artifacts.

In 2017, the provincial government recorded 8.8 million tourist arrivals, about half of which visited the Padre Pio Shrine in Sto. Tomas. But elsewhere in the province are several old churches, heritage houses and pilgrim sites.

In Balayan town, for instance, is the ancestral home of Sixto Lopez, said to be a friend of the young Dr. Jose Rizal, the national hero.

From Balayan, it takes about 45 minutes (by jeep plying the Balayan-Lemery route or van bound for Batangas City) to Taal, but try not to miss Calaca’s famous “lomihan” at Barangay Madalunot. “Lomi,” the soupy noodle topped with pork slices and innards, is one of Batangas’ delicacies. 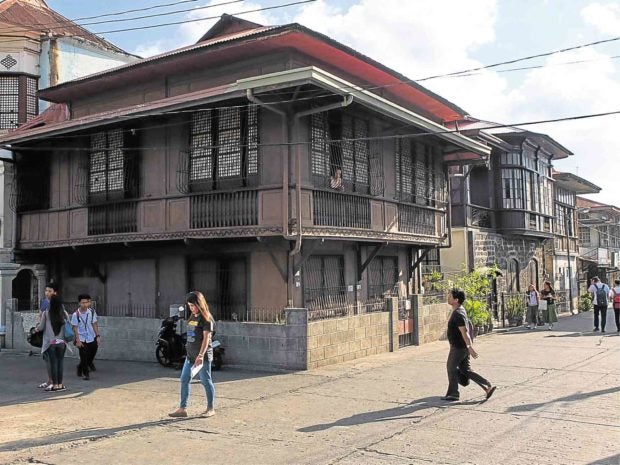 Taal town is the acknowledged heritage capital of Batangas.

San Luis town has a new pilgrim site. Off the main road at Barangay Luya is a giant image of the Sacred Heart of Jesus on top of a hill.

Listen to the stories of Victor Corales, a seafarer who had dreamed about building the statue. Corales also grows stingless bees and sells bottles of raw honey and honey-flavored ice cream at the site.

Taal (population: 56,7000) is known as the heritage capital of the province, with 142 old houses mostly at the poblacion, or “core zone.” The Minor Basilica of St. Martin of Tours, the biggest Catholic church in Asia, is also at the center. 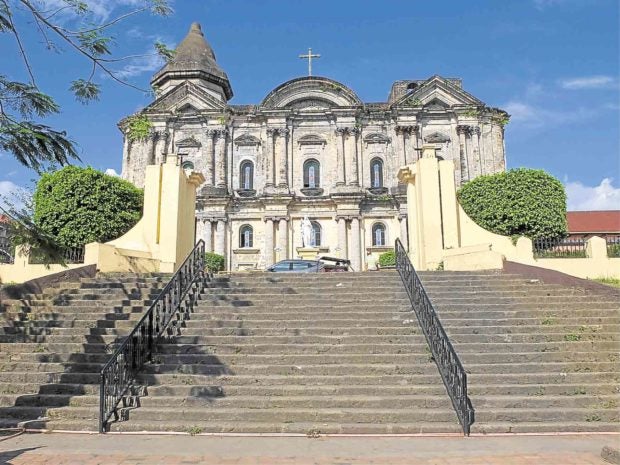 The Minor Basilica of St. Martin of Tours, also known as Taal Basilica, is the biggest Catholic church in Asia. —PHOTOS BY CLIFFORD NUÑEZ

Mayor Fulgencio Mercado said the local government had set policies to preserve the heritage houses and programs to revive the traditional “balisong” (fan knife) and “burda” (embroidery) industries. A number of embroiderers, mostly old women, are still found in the villages of Iba, Cawit, Laguile and Luntal.

“Unfortunately,” Mercado said, “younger generations seemed to have lost interest in the craft.” He said the local government will open a “balisong and burda academy,” a skills program funded by the Department of Trade and Industry. 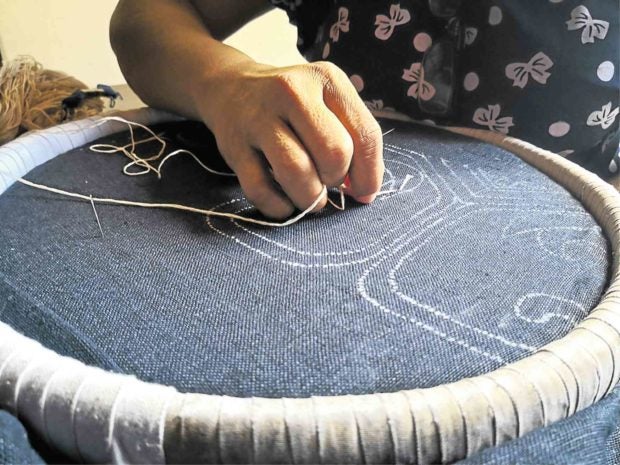 Taal is also known for its traditional hand embroidery.

A weekend in Batangas is never complete without a visit to any of its beaches. One of the “rising stars” is the white sand Masasa beach in Tingloy (population: 19,000), the lone island-municipality. It is about 45 minutes away by boat from Mabini, known for its dive sites.

There are no hotels in Tingloy, but residents have opened their homes to tourists for P300 to P700. Power supply is available only from noon to midnight.

“The concept of transient [homes] is good because you get to know the locals more,” Marasigan said.

About an hour away from Mabini is the capital, Batangas City (110 kilometers from Manila).

From an underdeveloped town in the 1960s, Batangas City today is thriving with several refinery, power plants and industries, including an international seaport.

One of the places to visit is the modern Museo Puntong Batangan, which features the city’s history and traditions. It is home to the Minor Basilica of the Immaculate Conception, which was built in 1581.

A jeepney ride away is another emerging tourist town, Lobo. Aside from its snorkeling sites, the municipal government is promoting kayaking at Lagadlarin Mangrove Forest and Olo-Olo ecopark. Entrance and environmental users’ fee is only P40.

It takes about two hours from Lobo to reach San Juan (population: 100,000). Most people commonly think Laiya is the town’s name when it is actually just the beach or the coastal villages (Laiya-Ibabao and Laiya-Aplaya).

Laiya alone has 99 beach resorts, mostly with white, fine sand, said Elsie Sadsad, municipal tourism officer. Aside from beach bumming, there are many other things to do, like trying out the adrenalin-pumping Laiya Adventure Park (LAP).

San Juan is also home to pottery making and heritage houses, among them the Marasigan Heritage House on General Luna and Rizal streets. 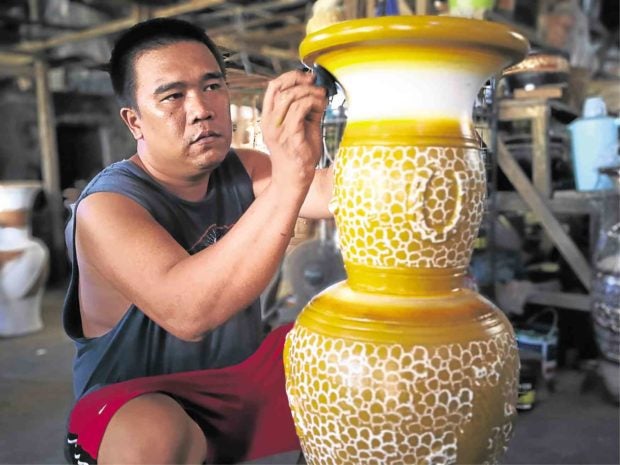 Return by noon then travel to Calatagan

Leave for the Sixto Lopez Ancestral House in Balayan

Leave Manila for Batangas City via SLEx and STAR Toll (There are bus trips from Cubao, Kamuning and Buendia to Batangas Grand Terminal)

Travel to Mabini (travel time is about an hour)

From Mabini, take the boat to Tingloy

Travel back to Mabini or Batangas City

Travel back to Manila