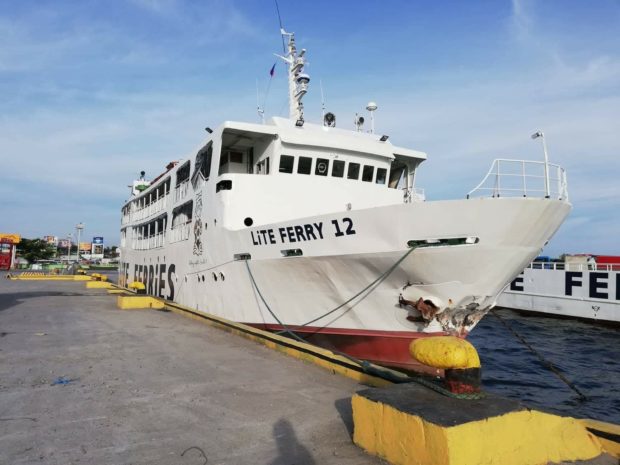 MV Lite Ferry 12 at the Tagbilaran Port after it crashed into the wharf. PHOTO by Leo Udtohan / Inquirer Visayas

TAGBILARAN CITY—At least 9 passengers including a pregnant woman were injured when their vessel slipped from its dock and slammed into a concrete divider at the Tagbilaran Port at 5:25 p.m. on Thursday.

The vessel, MV Lite Ferry 12 owned by the shipping firm Lite Shipping Corporation, was slightly damaged when it smashed into the concrete pavement of the port.

MV Lite Ferry 12 was bound for this city from Cebu City.

First aid responders were sent to Tagbilaran Pier to provide immediate treatment to the wounded passengers who were brought to a hospital.

The ferry was carrying 63 passengers.

According to Port Manager James Galantao, the boat was maneuvering for docking when the port main engine gear transmission failed to guide or control the movement of the vessel that caused the damage of the side pavement of Berth 2 Corner Edge.

Galantao added that MV Lite Ferry apparently lost control because of the strong waves due to a bad weather caused by tropical storm “Domeng.”

A passenger, who asked not be named, recalled she was jolted by a loud thud while the vessel was approaching the Tagbilaran Port.

Before she realized what was happening, she was thrown into the other deck because of the impact.

She suffered bruises in the legs but she was immediately released from the hospital.

The boat cancelled its scheduled voyage on Thursday night to Cebu City. It is still at the port on Friday night.

Galantao said the incident didn’t affect the operation of the port.

(It didn’t affect the operations because Lite Shipping has many vessels for their other trips. The operation is normal at the port)

The Philippine Coast Guard (PCG)-Tagbilaran required the vessel owners to submit marine protests, or reports about the accident.

Galantao said they have to assess the damage and open for options on how to repair the damage pavement.

There was no official statement released by the shipment company. /jpv

Read Next
Inday Sara to join Duterte in foreign trips to prevent future ‘kissing scene’
EDITORS' PICK
Get exciting deals and discounts when you download the new McDonald’s App
SM continues to send relief assistance to remote towns in Batangas
Palace: US Senate move also made Duterte junk VFA
Year of metal Rat: ‘Rooster’ Duterte warned of scandals
China expands lockdown against virus, fast-tracks hospital
‘A greener, cleaner tomorrow’: A how-to guide for Filipinos who want to help with today’s energy crisis
MOST READ
No time for revelry; Tagaytay instead plans for alert level 5
Palace: US Senate move also made Duterte junk VFA
Countries with confirmed cases of coronavirus
172 Chinese tourists arrive in Bohol
Don't miss out on the latest news and information.