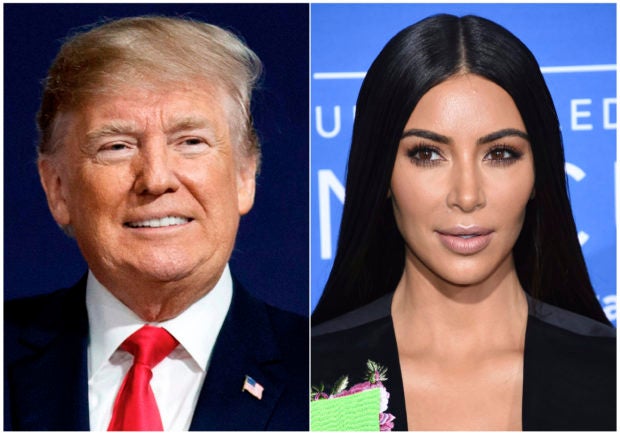 This combination photo shows President Donald Trump at a campaign rally in Moon Township, Pa., on March 10, 2018, left, and Kim Kardashian West at the NBCUniversal Network 2017 Upfront in New York on May 15, 2017. Photo by Evan Agostini/Invision/AP

WASHINGTON — Flexing his clemency powers once again, President Donald Trump has commuted the life sentence of a woman whose cause was championed by reality TV star Kim Kardashian West.

“BEST NEWS EVER!!!!” was the exuberant Twitter response from Kardashian West, who visited the White House last week to press the case, on Wednesday.

Alice Marie Johnson, 63, had spent more than two decades behind bars, serving life without parole for drug offenses. She was released hours after the White House announcement, and ran into her family members’ arms.

Michael Scholl, a member of Johnson’s legal team, said she was released just before 6 p.m. Wednesday from federal prison in Aliceville, Alabama. Footage from local news station WVTM-13 showed Johnson running toward her family, throwing her arms wide-open and embracing them in front of a crowd of onlookers.

“Everybody was crying and hugging,” Scholl said.

“I’m just so thankful. I feel like my life is starting over again,” Johnson said moments after her release, calling Kardashian West an “angel” and thanking Trump “for giving me another chance at life and restoring me to my family.”

Unlike a pardon, the commutation will not erase Johnson’s conviction, only end her sentence.

Trump’s decision, his latest inspired by a celebrity champion, comes amid a flurry of recent pardons issued by the president. He said he’s considering a long list of other clemency actions for those famous and not, including former Illinois Gov. Rod Blagojevich, who is serving 14 years in prison for corruption; and celebrity homemaker Martha Stewart, who served about five months on charges connected to an insider trading case.

Trump has been working outside the traditional pardon process usually overseen by the Justice Department, and has appeared to favor cases that catch his attention — because they have been championed by friends, celebrities or conservative media, or involve people he sees as rivals. Trump has also been drawn to cases in which he believes prosecutors may have been motivated by politics — situations that may remind him of his own predicament at the center of special counsel Robert Mueller’s investigation into Russian election meddling.

The federal prosecutor who oversaw Stewart’s case in New York was James Comey, one of Trump’s principal antagonists and the man he fired as FBI director last year.

Some have seen the pardons as sending a message to former campaign aides now ensnared in the Mueller probe or other legal inquiries, including Trump’s longtime lawyer and legal “fixer” Michael Cohen, whose finances are under federal investigation.

Indeed, the wife of former Trump campaign aide George Papadopoulos, who pleaded guilty to lying to the FBI about his Russia contacts, appeared on Fox News this week to lobby her husband’s case.

“I trust and hope and ask to President Trump to pardon him,” Simona Mangiante Papadopoulos told Trump’s favorite network.

As he considers additional pardons, Trump is looking at cases where he can bring “relief to folks who he feels have been ‘treated unfairly,’ a term the president uses frequently to describe many different situations,” Kellyanne Conway, a top adviser to Trump, said on Wednesday.

Shawn Holley, Kardashian West’s attorney who accompanied her to the White House last week, said the reality star was the one who broke the news to Johnson on Wednesday in what she described as “the most wonderful, emotional and amazing phone call with Alice, Kim and Alice’s lawyers.”

“Once Alice’s family joined the call, the tears never stopped flowing,” Holley said in a statement.

“Telling her for the first time and hearing her screams while crying together is a moment I will never forget,” she wrote.

In a statement announcing the president’s decision, the White House said Johnson “has accepted responsibility for her past behavior” and had been a model prisoner, working hard to rehabilitate herself and serve as a mentor to fellow inmates.

“While this Administration will always be very tough on crime, it believes that those who have paid their debt to society and worked hard to better themselves while in prison deserve a second chance,” said a statement from the office of White House spokeswoman Sarah Huckabee Sanders.

Attorney Brittany K. Barnett, another member of Johnson’s legal team, said Johnson felt overwhelmed with emotion and like she’s been “resurrected from the dead.”

Johnson was convicted in 1996 on eight criminal counts related to a Memphis-based cocaine trafficking operation involving more than a dozen people. The 1994 indictment describes dozens of deliveries and drug transactions, many involving Johnson.

Federal courts, including the Supreme Court, rejected her appeals. Court records showed she had a motion pending for a reduction in her sentence but prosecutors were opposed, saying the sentence was in accord with federal guidelines based on the large quantity of drugs involved.

Her clemency had also been rejected by President Barack Obama, who commuted the sentences of hundreds of federal inmates convicted of drug crimes.

Kardashian West visited the White House last month to meet with Trump son-in-law and senior adviser Jared Kushner, who is overseeing the administration’s push to overhaul the nation’s prison system. She also met with Trump in the Oval Office, a photograph of which the president posted on Twitter.

Kardashian West thanked the president and his team and said Johnson’s commutation “is inspirational and gives hope to so many others who are also deserving of a second chance.”

The decision to commute Johnson’s sentence was advocated by Kushner and Trump’s eldest daughter, Ivanka. Others, including White House counsel Don McGahn and chief of staff John Kelly, were less enthusiastic, according to a senior administration official who spoke on condition of anonymity to discuss internal deliberations. /kga