Cops have no warrant vs robbery suspect, so they nabbed him for smoking | Inquirer News
Close
menu
search

Cops have no warrant vs robbery suspect, so they nabbed him for smoking 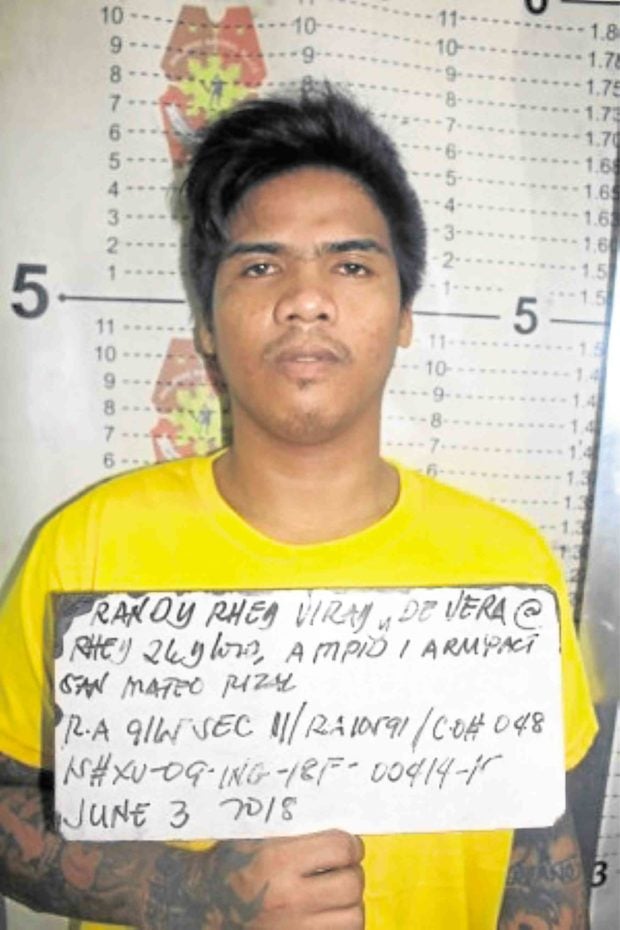 THIRD GANG MEMBER TO FALL. Randy Rhey Viray (left photo), 26, admitted being one of the armed men who victimized the Mabuhay Manor hotel staff and some guests on Jan. 2. —PHOTOS COURTESY OF MARIKINA AND PASAY POLICE

The police got hold of a third suspect in the multimillion-peso Mabuhay Manor hotel robbery in Pasay City in January — but only after waiting for him to commit a simpler violation: Smoking in a public place.

Randy Rhey Viray was accosted on A. Bonifacio Avenue in Barangay Barangka, Marikina City, for violating the city’s no-smoking ordinance, according to Senior Supt. Roger Quesada, the city police chief.

When his backpack was inspected, however, the 26-year-old Viray was found carrying a loaded .38-caliber revolver, Quesada said. The suspect also hid a sachet of suspected “shabu” (crystal meth) in his ball cap, the official added.

The Marikina police placed Viray under surveillance after Rene Cachila, another suspect who was earlier arrested, implicated him in the Jan. 2 robbery.

“But without an arrest warrant issued by a court, we cannot just take hold of him, so we [monitored] him until he [committed] a violation,” Quesada told the Inquirer.

Chief Insp. Glenn Aculana, chief of the Marikina police’s intelligence unit, said a subpoena had already been issued by a Pasay court against Cachila and Ramoncito Calilap, the alleged mastermind who was arrested also in Marikina in March for possession of illegal drugs and an unlicensed firearm.

Aculana said that during the hotel robbery it was Viray who held up Dominador Castro, a Filipino-American who was then in the country for the holidays. Viray took around $15,000 in cash from Castro and his family, as well as their gadgets, jewelry and other valuables.

Calilap recruited  Cachila and Viray for the job, promising them a share in the loot, the official added. At that time, Viray had just been released from jail and was facing a complaint for illegal possession of firearms.

“But Viray said he did not receive his (full) share from the robbery,” Aculana said, noting that all the suspect got was P2,000.

Three more suspects remain at large. The same group is also believed to be behind other robberies in Marikina and San Mateo, Rizal province, Aculana added.

When the Inquirer spoke to Viray on Wednesday, he did not deny his role in the heist, saying Calilap offered him a cut in the loot.

He said he was the man in the white jacket who carried a pistol with a silencer, and whose face was exposed because his mask fell off before he and his cohorts got into the hotel lobby.

But Viray said he was already trying to turn over a new leaf—earning an honest living as a construction worker—when he was arrested on Sunday.

He said he wanted to give a better life to his wife and son, after being released from jail in November last year in connection with a gun violation. He claimed that the police merely “planted” the gun.