His amulet did not save Bohol killer from police bullets 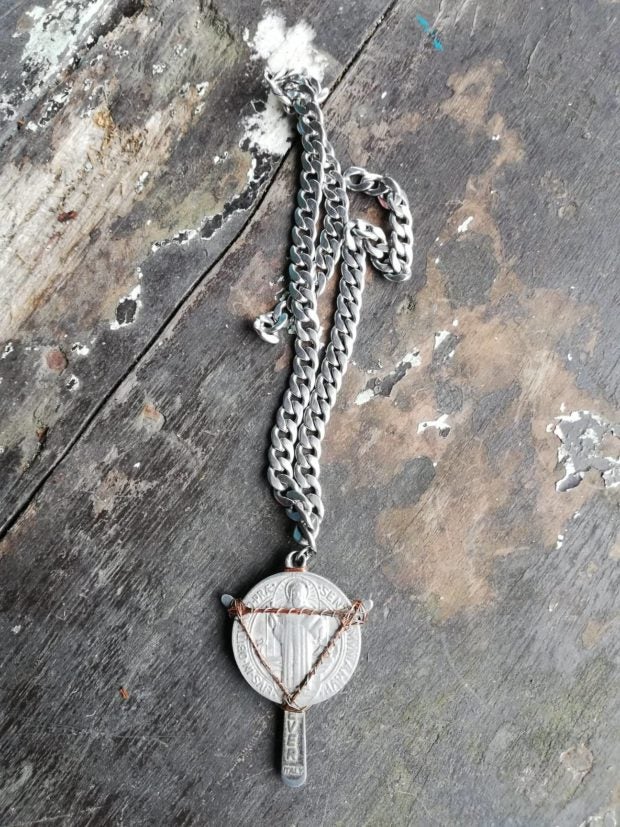 A medal believed to be an anting-anting (amulet) was allegedly owned by gunman Emigdio Aparece, Jr, one of the suspects in the killing of Buenavista, Bohol Mayor Ronald Lowell “Sample” Tirol. Aparece was killed in an encounter on Wednesday, June 6, 2018, more than eight years of hiding. Leo Udtohan/Inquirer Visayas

Emigdio Aparece Jr., 23, wanted for the murder of Buenavista, Bohol Mayor Ronald Lowell “Sample” Tirol, was killed in an encounter in Barangay Concepcion in Danao town early Wednesday morning. Aparece has been in hiding for eight years.

He was tagged as one of the most wanted in Central Visayas for his numerous killings.

A source said Aparece, 23, a resident of Putingbato in Buenavista town was infamous in their barangay for using “anting-anting” (amulet).

A police record shows that Aparece started as a gunman at the age of 14.

He was tagged in the killing of 11 persons and in five frustrated murder cases.

He also killed SPO1 Alejandro Estorgio of Buenavista Police Station, who was then conducting patrols to secure a disco party as part of the town’s foundation day festivities. Estorgio was part of a police team tasked to hunt down Aparece.

Aparece, who was tagged as one of the three suspects in the killing of Tirol, served as the look-out. Another gunman, Elmer Melencion, shot Tirol.

Aparece had a P200,000 bounty on his head but he remained elusive despite hot pursuits by police.

Police said Aparece’s neighbors had not been cooperative as they were afraid for fear of drawing his ire.

Concerned citizens tipped the police that Aparece was sighted in Sitio Sta. Ana.

At 2:45 a.m. on Wednesday, police found the nipa hut in a remote area where Aparece was hiding.

When the warrant was served to Aparece, he told the police he would surrender. But he allegedly shot the police.

A grenade was found inside the nipa hut. Police also recovered a St. Benedict’s medal believed to be an amulet.

“He was confident that he wouldn’t get caught because of his anting-anting. In the end not even his amulet could not save him from evading the law,” said Tamayo.

Manhunt operations were ongoing for Melencion and another unidentified suspect.