4 hurt in helicopter crash inside Dole plantation in South Cotabato 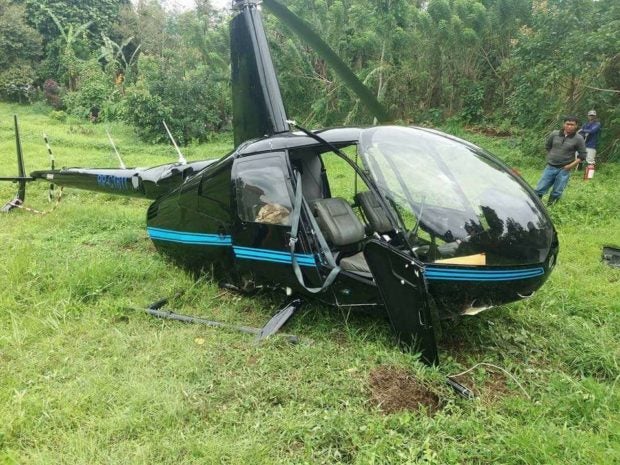 The Raven 2 chopper that crashed on a Dole-Stanfilco plantation in Barangay Kablon in Tupi, South Cotabato. Contributed photo

TUPI, South Cotabato – Four people, including two foreign nationals, were slightly injured when the four-seater helicopter they were riding in crashed inside the Dole Philippines plantation here Wednesday morning.

The chopper, a Raven 2 and piloted by Captain Dennis Figueroa, 37, of Koronadal City, had three passengers. It developed engine trouble shortly after takeoff from the Dole Stanfilco helipad in Kablon.

They were slightly injured, along with Figueroa. 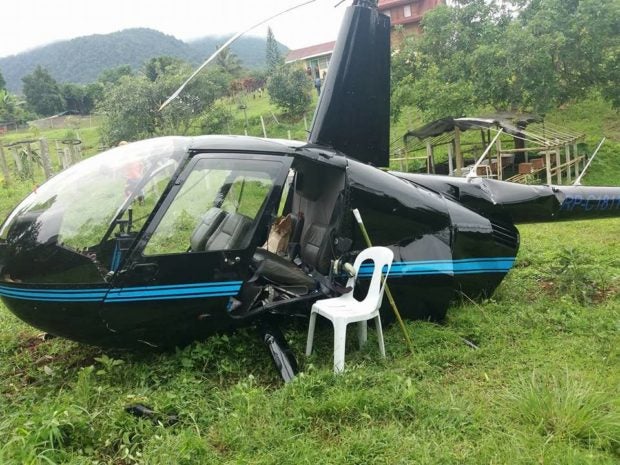 The Raven 2 chopper that crashed on a Dole-Stanfilco plantation in Barangay Kablon in Tupi, South Cotabato. Contributed photo

The chopper, owned and operated by Lionair Inc. left Davao City on Wednesday morning and picked up the three passengers from Barangay Cannery in Polomolok and proceeded to Kablon.

From Kablon, the aircraft was to transport the three passengers to Surallah, also in South Cotabato, when its engine malfunctioned. The pilot maneuvered and crash landed the aircraft.

Clarete said the passengers “sustained scratches and bruises but otherwise conscious and in good condition.” They were brought to the Howard Hubbard Memorial Hospital in Polomolok.

It was the second helicopter crash in South Cotabato in three weeks. On May 14, a helicopter piloted by Capt. Reynaldo Acosta, husband of Davao City Councilor Mabel Sunga-Acosta, crashed in the hinterlands of T’boli town due to strong winds.

The aircraft was being used to spray chemicals on a Lapanday-operated banana plantation. Acosta survived with minor injuries but the aircraft was damaged.