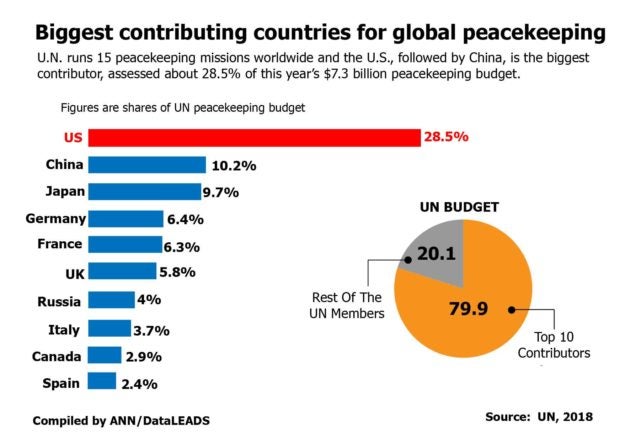 The United Nations has 193 members and each member has to contribute to certain parts of the organization keeping in with the conditions of the membership. The assessed contribution that each member is supposed to make is determined by factoring in gross national income and population of the country.  This year the United Nations has agreed to settle for $7.3 billion annual budget for its peacekeeping missions around the world.

The U.S. remains the largest contributor to the UN peacekeeping missions. It contributes 28.5 per cent of the total budget. Even with President Trump announcing budget cuts the country still remains the top contributor. While the U.S. pays more than others countries but it is still paying less than other countries depending on the gross national income and the massive US economy.

While the U.S. is rolling the cutbacks to the budget, in contrast China is increasing its contribution. China contributes 10.2 per cent of the annual budget.  The country has increased its financial contribution over the last decade owing to President Xi’s pledge at the 2015 Leaders’ Summit in New York to contribute $1 billion to peacekeeping in the next five years.

Japan is the third highest contributor to the UN peacekeeping mission.  It contributes 9.7 per cent of the annual budget followed by Germany (6.4%), France(6.3%) and the United Kingdom (5.8%).

Russia accounts for 2% of the world’s income but pays for 4% of the UN budget. It contributes 4% of the annual budget. It is also the main contributor of air transportation services and the second largest supplier of contractor services to UN peacekeeping operations.

Italy continues to remain in top ten contributors to the UN budget and contributes 3.7% of the annual budget. It is also the first contributor of blue helmets with over 1,000 men and women deployed mostly in Southern Lebanon. Canada and Spain contribute 2.9% and 2.4% respectively.

The UN currently has 100,950 peacekeepers and if the UN peacekeeping force was ranked against national militaries, it would be the 44th largest military in the world, or around the same size as the number of active military troops in Malaysia.

Ethiopia is the largest provider of troops with 8,326 peacekeepers, or about 6% of its active military troops. South Asian countries have traditionally been top providers for peacekeepers. India, Pakistan, and Bangladesh are all in the top five, and Nepal is sixth in terms of peacekeepers.  Almost all of their peacekeepers are deployed on missions in Africa.