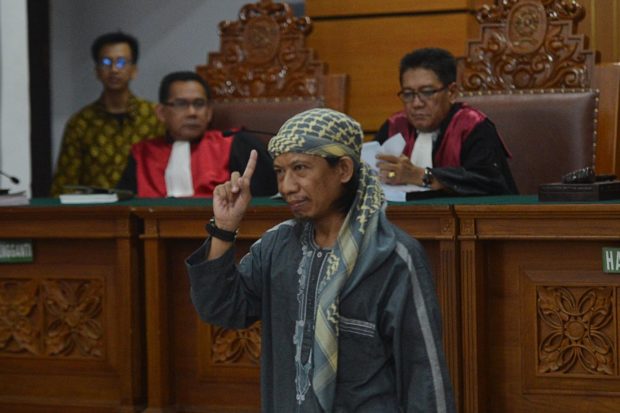 Standing trial: Suspected terrorist Oman Rochman alias Aman Abdurrahman, a defendant in the Thamrin bomb attack case, attends a hearing at the South Jakarta District Court on May 25. PHOTO from Antara/Wahyu Putro A via The Jakarta Post / Asia News Network

The National Police revealed on Tuesday that 96 people allegedly involved in terrorist activities had been captured or killed across Indonesia as part of a crackdown on terrorist networks in the country.

“Fourteen of [those 96 people] were gunned down by the police force for attempting to resist arrest,” Tito said during a joint coordination meeting at the National Police headquarters on Tuesday.

He explained that terrorist networks existed in most Indonesian provinces. Some of them were sleeper cells at the moment, but others were active.

Learning from the Surabaya bombings, Tito said, sleeper cells were more prone to committing terrorist acts than active ones. However, it was also important to keep an eye on the active terrorist cells, he went on.

On Sunday, counterterrorism squad Densus 88 captured three alleged terrorists in Pringsewu regency, Lampung. The suspects were identified only as US, 43, IN, 37, and IM, 42. They stand accused of being involved with Jamaah Ansharut Daulah (JAD), the largest local terrorist group, which pledges allegiance to the Islamic State (IS) group.