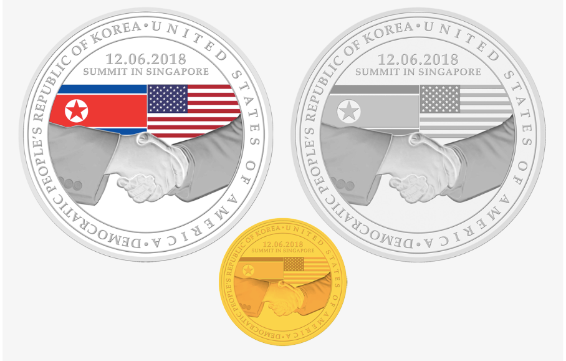 Singapore will strike commemorative medallions to mark the historic meeting between US President Donald Trump and North Korean leader Kim Jong Un in the city-state next week.

The medallions will depict an “affirmative handshake” between the two leaders, the scheduled date of the summit, and the flags of both countries, the Singapore Mint said in a statement Tuesday.

At the back are the national flowers of both countries — roses for the US and magnolias for North Korea — and a dove with the words “world peace.”

“The medallions not only commemorate this momentous step to world peace, but mark Singapore’s role as a neutral host, and an economic and security gateway between the East and the West,” the mint added.

The medals will be available in three versions: gold, silver, and nickel-plated.

Price tags for the other two versions are not as hefty: the silver medallion is listed at Sg$118 and the nickel-plated one at Sg$36.

Only 3,000 gold medallions will be made available, while 15,000 silver versions will be up for grabs. The number of nickel-plated medallions minted will depend on demand, the mint said.

Last month, the White House Communications Agency struck a commemorative coin featuring Trump and Kim against a backdrop of the US and North Korean flags.