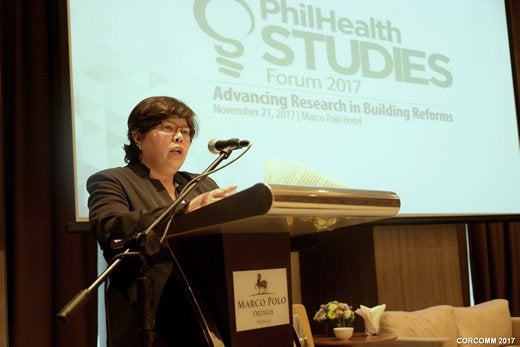 Former Philippine Health Insurance Corp. (PhilHealth) interim head Celestina Ma. Jude dela Serna remains to be a board member of the agency, Malacañang said on Tuesday, a day after President Rodrigo Duterte fired her over alleged excessive trips and allowances.

“Yes she is,” Roque said in a text message when asked if Dela Serna was still part of the state health insurer.

Dela Serna remains to be a board member representing the overseas Filipino workers sector of PhilHealth.

On Monday, Malacañang announced the appointment of Dr. Roy Ferrer, a board member of PhilHealth who hails from Davao City, as acting President and Chief Executive Officer of PhilHealth.

A Commission on Audit memorandum released on April showed that Dela Serna incurred travel expenses, including hotel accommodations and plane fares to and from Bohol and Manila.

In a radio dwFM interview on Tuesday, Roque confirmed that Dela Serna was removed due to her alleged excessive trips and allowances.

(It is already included there. Probably the P3,800 per day in the hotel she spent while she was still OIC and that she allowed PhilHealth to spend for it while PhilHealth is suffering deficit.)

The Palace official said the firing of Dela Serna was a reminder to government officials not to abuse their powers.

(That is the message of our President and if you’ll ask the people from Davao, this OIC [Dela Serna] is very influential, so maybe she has become abusive.)