Death toll rises to at least 62 in Guatemala volcano eruption 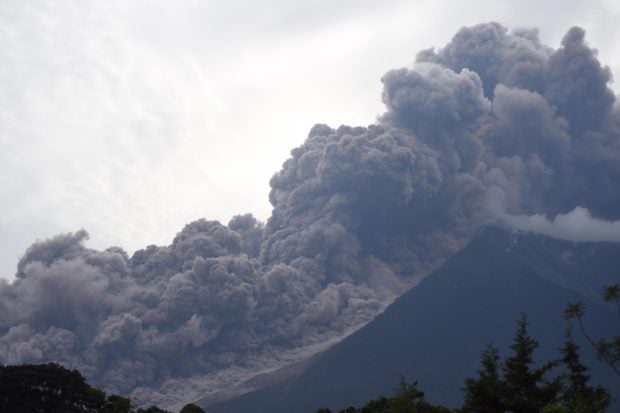 Rescue workers have pulled more bodies from under the dust and rubble left by an explosive eruption of Guatemala’s Fuego volcano, bringing the death toll to at least 62.

Fanuel Garcia, head of the country’s Institute of Forensic Sciences (INACIF) – which is tasked with identifying the remains – told reporters that “so far, the INACIF is working on 62 bodies.”

The 3,763-meter (12,346-foot) volcano erupted early Sunday, spewing out towering plumes of ash and a hail of fiery rock fragments with scalding mud.

Authorities had warned the death toll could rise on Monday after searches resumed for survivors in communities on the mountain’s southern flank.

After an initial toll of 25 dead, it was revised upwards within hours as bodies were recovered from villages razed by the tumbling mud.

“There are missing persons, but we do not know how many,” said Sergio Cabanas of Guatemala’s disaster management agency. A roll call of communities on the slopes of the volcano was under way, he also said

The speed and ferocity of the eruption took mountain communities by surprise, with many of the dead found in or around their homes.

Cabanas said those who were killed had been overrun by fast-moving burning material discharged by the volcano last Sunday. Communities located on its southern slope were the worst hit. Several of the dead were children.

An AFP journalist saw at least three bodies burned in the rubble of the village of San Miguel Los Lotes, where rescue workers, soldiers, and police were desperately searching for survivors.

Dead dogs, chickens, and ducks also lay among the mud and ash, much of it still smoking.

“I do not want to leave, but go back, and there is nothing I can do to save my family,” a weeping Eufemia Garcia, 48, told AFP. She was searching for her three children, her mother, nephews, and siblings.

Garcia, from Los Lotes, said she escaped with the help of her husband.

More than 1,000 people were being housed in temporary shelters.

United Nations Secretary-General Antonio Guterres said he was deeply saddened by the “tragic loss of life and the significant damage caused by the eruption,” and said the UN was “ready (to help in) national rescue and relief efforts.” 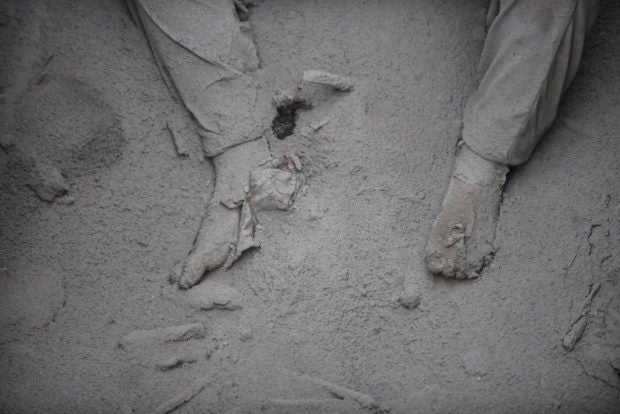 Partial view of a victim of the Fuego Volcano in San Miguel Los Lotes, a village in Escuintla Department, about 35 kilometers southwest of Guatemala City, taken on June 4, 2018, a day after the eruption. At least 62 people were killed, according to the National Coordinator for Disaster Reduction (Conred), when Guatemala’s Fuego volcano erupted on Sunday, June 3, 2018, belching ash and rock and forcing the airport to close.. / AFP PHOTO / Johan ORDONEZ

President Jimmy Morales, who has declared three days of national mourning, was due to visit the disaster zone on Monday.

“The volcano has erupted before, but never like this,” said Gustavo Larius, a 27-year-old bricklayer searching the streets of his village for missing family and friends, a handkerchief pressed over his mouth and nose.

The eruption of the volcano sent ash billowing over the surrounding area, turning plants and trees gray and blanketing streets, cars, and people.

Farmers covered in ash fled for their lives as civil defense workers tried to relocate them to shelters.

“This time we were saved; in another (eruption) no,” said Efrain Gonzalez, 52, sitting on the floor of a shelter in the city of Escuintla, where he arrived with his wife and one-year-old daughter.

Gonzalez was overwhelmed with despair, as two more of his children, aged 10 and four, were missing. They were trapped in their home, which was flooded with hot mud that descended from the volcano.

The eruption ended after 16 and a half hours but “there is a likelihood that it will reactivate,” warned the Institute of Volcanology. 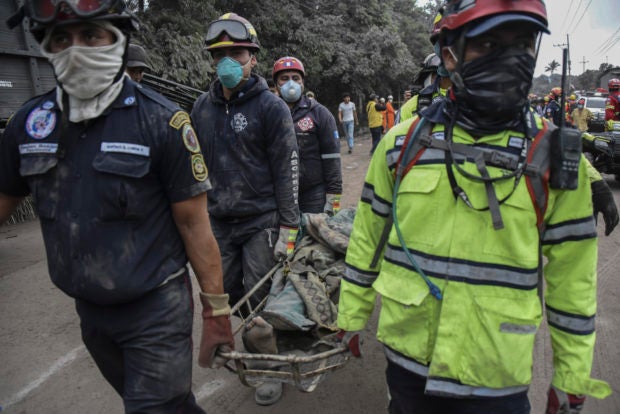 Police officers carry a victim in the ash-covered village of San Miguel Los Lotes, in Escuintla Department, about 35 kilometers southwest of Guatemala City, on June 4, 2018, a day after the eruption of the Fuego Volcano. At least 62 people were killed, according to the National Coordinator for Disaster Reduction (Conred), when Guatemala’s Fuego volcano erupted on Sunday, June 3, 2018, belching ash and rock and forcing the airport to close. / AFP PHOTO / Johan ORDONEZ

The speed of the eruption took locals by surprise and could be explained by it producing pyroclastic flows, sudden emissions of gas and rock fragments, rather than lava, according to Volcanologist David Rothery of Britain’s Open University.

“The videos and still images I’ve seen suggest instead one or more pyroclastic flows. This is when a violently erupted mass of rock fragments and hot gas finds itself too dense to rise as an ash column and instead cascades down the volcano’s slopes.”

“Pyroclastic flows or surges can move at over 100 kilometers (62 mph) per hour and may be hot enough to glow like molten lava. They can travel further, as well as much faster, than lava flows,” Rothery added.