‘It’s a once in a lifetime experience,’ says Filipina kissed by Duterte in Seoul | Inquirer News
Close
menu
search

‘It’s a once in a lifetime experience,’ says Filipina kissed by Duterte in Seoul 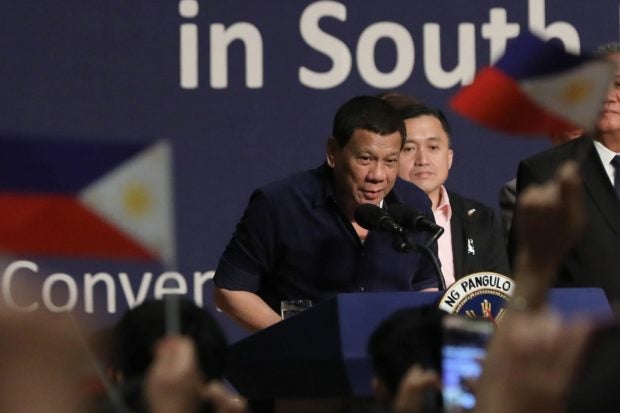 President Rodrigo Roa Duterte delivers his speech during the meeting with the Filipino community at the Grand Hilton Convention Center Seoul in South Korea on June 3, 2018. ALFRED FRIAS/PRESIDENTIAL PHOTO

The woman  kissed on stage by President Rodrigo Duterte during a gathering of Filipinos in Seoul, South Korea finds “no malice” in the act and even said, “Happy ako kasi once in a lifetime experience ‘yon.”

Bea Kim, a mother of two and wife of a Korean national, said in a video interview with the government-run Philippine News Agency, “Walang malisya doon.”

On Sunday, President Duterte, after his speech at Grand Hilton hotel and convention center, surprised his audience when he called Kim and another woman to receive a book. The President surprised them, even more, when he kissed Kim on the lips.

In the video, Kim narrated that she was “nervous, excited, and scared” before the kiss, especially as her husband was sitting in front of the stage.

Duterte was in Seoul for a three-day official visit on the invitation of South Korean President Moon Jae-in, whom he would meet on Monday.

Meanwhile, some lawmakers branded the President’s action as “unethical.”

Gabriela Rep. Arlene Brosas said  “it was really a shock but more than that is the message conveyed to women.  Grabe, as if he could do anything to women. Being the President he should be mindful of his position.”

The congresswoman also urged the government to refrain from “gimmickry” and address issues concerning women.

Meanwhile, Akbayan Senator Risa Hontiveros urged the public not to pass judgment on the overseas Filipina worker whom the President kissed.  “I also call on the public to exercise vigilance and discernment.”

Hontiveros noted that even if the kissing incident was consensual, “it was not a meeting of two consenting individuals on equal terms. Uneven power relations were clearly at play.”/vvp