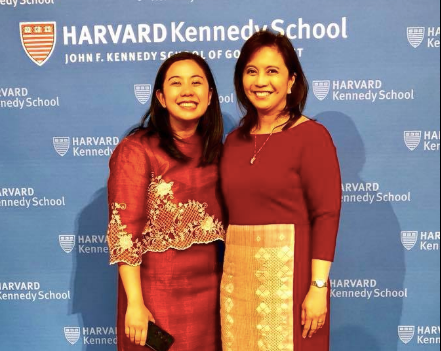 Vice President Leni Robredo seemed to have found a new past time, as she posted on social media her first video blog (vlog) about her visit to the United States for her daughter’s commencement rites.

“I do not know how to take selfies, much more to do vlogs. But this is my attempt, much to the embarrassment of my children,” VP Robredo said in the caption of her vlog, which was posted on her personal Facebook account on Monday.

In the vlog, which was interlaced with new wave and upbeat songs, Robredo toured her viewers to the different places within the Cambridge campus, such as the classroom and facilities of Harvard’s Business School, Kennedy School, and Law School.

The vice president flew to the US on May 17 to attend the graduation of her eldest daughter Aika, who finished her Master’s degree at Harvard.

READ:  Robredo off to US for daughter’s Harvard graduation

Like her father, the late Department of Interior and Local Government Secretary Jesse Robredo, Aika was an Edward S. Mason fellow of the Harvard Kennedy School of Government.

“Took several days off from work to be a full-time Mom to Aika in Cambridge during Commencement Week. They had Commencement Exercises almost every day, and I attended each and every event,” Robredo said.

“In between, she brought me around the different Harvard Colleges and we visited our old haunts, the ones we usually went to when we lived there 20 years ago when Jesse was the student,” she added.

Robredo further showed the former schools of her children and the Peabody Terrace, the building where her family used to live 20 years ago.

“I do not know when we will have the privilege of visiting again so I decided to record everything on video for posterity,” Robredo said.

Robredo noted that she took the videos herself but it was her daughter. Jillian. who edited the vlog.

“Thank you to Jillian who edited my videos. What was left was just 10%, I think, of the original because Jillian said I spoke too much and my hand was too shaky most of the time,” she added.  /kga