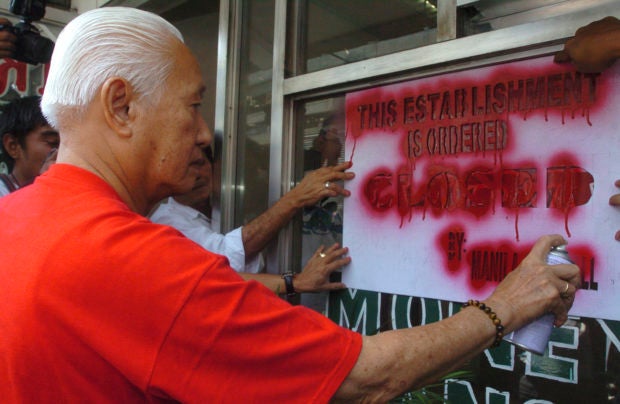 SHAME CAMPAIGN When he was Manila mayor, Alfredo Lim started a spray-painting drive meant to shame drug pushers and users. His mantra at the time was: “The law applies to all or none at all.” —INQUIRER FILE PHOTO

“Dirty Harry” has joined the political party of “The Punisher”—the ruling Partido Demokratiko Pilipino-Lakas ng Bayan (PDP-Laban)—an indication that he may run again for Manila mayor next year.

Alfredo Lim, a former Manila mayor and former senator, earned the nickname Dirty Harry for his uncompromising stance against crime when he was the chief of the National Bureau of Investigation in 1989.

When President Rodrigo Duterte, then Davao City mayor, was featured as “The Punisher” in Time in 2000, the magazine quoted Lim as saying that if the Philippines had “20 more mayors like Duterte, the peace and order situation … would improve.”

Lim, who believes he and the President have the same style of governance, was one of the late President Corazon Aquino’s staunchest supporters. He was a member of the Liberal Party.

A statement from Lim’s office said the former mayor and senator jumped ship in February and joined PDP-Laban.

This does not make Lim the party’s standard-bearer in Manila yet in next year’s mayoral race.

Lim ran against former President Joseph Estrada for the Manila mayoralty in two consecutive elections, losing by less than 3,000 votes to the latter in 2016.

During his second consecutive term as Manila mayor from 1995 to 1998, Lim started a spray-painting drive meant to shame drug pushers and users. His mantra at the time was: “The law applies to all or none at all.”

Lim planned to implement the campaign, which ordered the homes of suspected drug traffickers to be spray-painted with warnings in red, across the country when he became interior secretary on Jan. 8, 2000.

But the program was declared “invalid and unconstitutional” by the Court of Appeals in January 2000 because it “amounted to invasion [of] and encroachment [into] the rights of the people without due process.’’

New York-based Human Rights Watch said in its 2009 report, “You Can Die Anytime: Death Squad Killings in Mindanao,” that summary killings of crime suspects had been the tactic used by local officials like Duterte and Lim.

Lim’s membership in PDP-Laban, according to the statement, was “spurred” by KKK (Kapayapaan, Kaunlaran at Katarungan), a Manila-based organization he founded years ago.

Lim, who reportedly plans to run in the Manila mayoral race in 2019, denounced on Sunday a fake Facebook account under his name.

The account, called Katapat Fred Lim, also has his picture on it.

In the account, Lim had supposedly sought the support of Chief Supt. Elmer Jamias, a former official at the Southern Police District whose men were involved in a brawl in 2015.

The post bore the title “Lim-Jamias 2019,” the statement said.

Lim said there was “no bad blood” between him and Jamias, stressing that he just wanted to clarify the lies and address fake news and fake Facebook accounts. —Reports from Aie Balagtas See and Inquirer Research