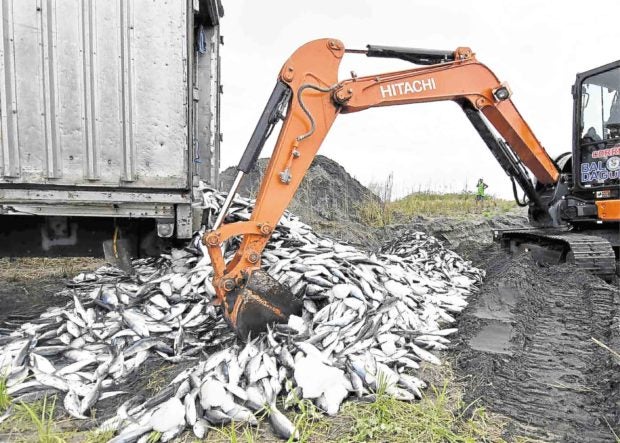 GONE TO WASTE Dead “bangus” (milkfish) were buried at the Dagupan City compound of the Bureau of Fisheries and Aquatic Resources after a massive fishkill last week. —RAY ZAMBRANO

DAGUPAN CITY — Extreme heat, followed by heavy rain, cost fish pen owners P110 million worth of “bangus” (milkfish) on Thursday at Kakiputan Channel in the towns of Anda and Bolinao in Pangasinan province.

The massive fishkill was a disaster waiting to happen, according to an aquaculture expert.

Bangus growers had been warned about oxygen depletion that had been detected at the channel in a 2002 study by the National Integrated Fisheries Technology Development Center (NIFTDC), said the research center chief, Westly Rosario.

“It was a disaster waiting to happen,” Rosario said.

“I think fishkills have been happening yearly in the area. They were just able to hide them,” he said.

Rosario said the NIFTDC advised growers to relocate their pens and cages after the study discovered that the organic matter at the bottom of the channel was 30 centimeters thick.

“A high level of hydrogen sulfide, which is produced by anaerobic bacteria, was an indication that there is no oxygen at the bottom of the channel,” Rosario said.

On Wednesday night, bangus started to gasp for air before they floated belly up, indicating that the dissolved oxygen level in the water was below normal, said Elizabeth Tomas, Anda agriculturist.

On Thursday morning, 172 cages and pens in the northern portion of Kakiputan Channel in the villages of Siapar, Awag and Mal-ong in Anda were teeming with dead fish.

In neighboring Bolinao, 67 of 250 pens at Barangay Culang, Luna and Luciente 2 in the eastern side of the channel also suffered a fishkill, leaving P24.1 million in losses, according to Florante Garcia, Bolinao aquaculture technician.

Tomas said some bangus growers were able to harvest their 2-month-old stocks.

Bangus is normally harvested after five to six months.

The fishkill may reduce bangus supply in Metro Manila and nearby provinces, Tomas said.

Pangasinan is the country’s top bangus producer, contributing 27.27 percent to total production from 2013 to 2015, according to the Philippine Statistics Authority.

Anda Mayor Aldrin Celdran on Thursday declared a temporary suspension of fish stocking in all fish pens and cages in the town.

He said he was also considering a five-month moratorium in the operations of pens and cages to allow the waters of Kakiputan Channel to breathe.

Fishkills normally take place during neap tides, when the tide level is at its lowest and the water does not flow.

But the fishkill episode last week occurred at spring tide, when the difference between high and low tide was highest, Rosario said. —GABRIEL CARDINOZA