Some Albay schools still roofless after storm damage in 2017 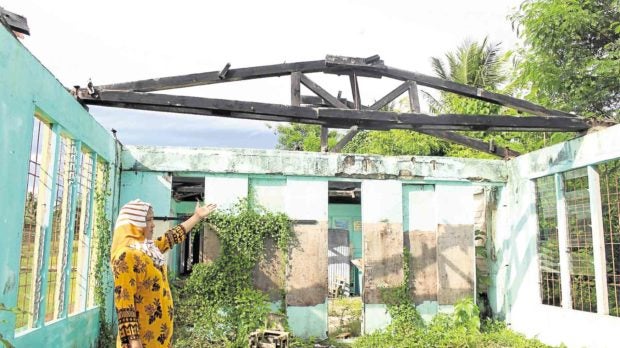 SIGN OF NEGLECT A teacher points to the roofless classroom of Rawis Elementary School in Tabaco town, Albay province, which was hit by Typhoon Nina in 2017. —MICHAEL JAUCIAN

TABACO CITY—Two days before the opening of classes on Monday, some schools in Albay that were damaged when Typhoon “Nina” (international name: Nock-ten) struck Bicol in December 2017 were still in a state of disrepair.

Jeneleta Bombita, teacher at Rawis, said a temporary learning space, or classroom, might have to be used again although she feared “it might collapse anytime.”

The temporary classroom was made of wood already rotting and built in 2017 yet, Bombita said.

The pitiful condition of school buildings in Rawis, Bombita added, was discouraging some students from attending classes on Monday especially if temporary classrooms were to be used again.

“They feel they are not safe,” said Preciocisima Tanggo, village chief of Rawis.

Tanggo said the village had been pleading from help from the national government but there had been no response.

According to the Bicol office of the Department of Education (DepEd), schools in the region were ready for school opening on Monday.

He said, however, that the construction of new school buildings to replace those destroyed during the storm was not realized because there was a delay in the delivery of the budget.

He said once the 2018 rehabilitation fund arrived, schools damaged by Nina would be prioritized.

He said at least 98 percent of 3,800 schools in Bicol were ready for Monday’s class opening.

In the Mindoro, Marinduque, Romblon and Palawan (Mimaropa) region, at least 244 policemen would be deployed for opening of classes to different schools to deal with bullying.

Supt. Imelda Tolentino, Mimaropa police information officer, said this was the first time that the regional police would deploy policemen against bullying in 279 public and private schools in the region.

The deployment was part of the Philippine National Police’s help to the DepEd under “Ligtas Balik Eskwela” in Mimaropa.

Chief Supt. Emmanuel Luis Licup, Mimaropa police chief, said in a statement he had already directed unit commanders to heed the order to deal with bullying in schools.

On Monday, at least 2,000 members of the Mimaropa regional police force would be deployed to schools, airports, seaports, transport terminals, malls and business centers.

Licup reminded the public to “take precautionary measures” against criminals who were likely to prey on students and other victims on school opening day. —With a report by Madonna T. Virola