Night out lands Jeron Teng, 2 other cagers in hospital 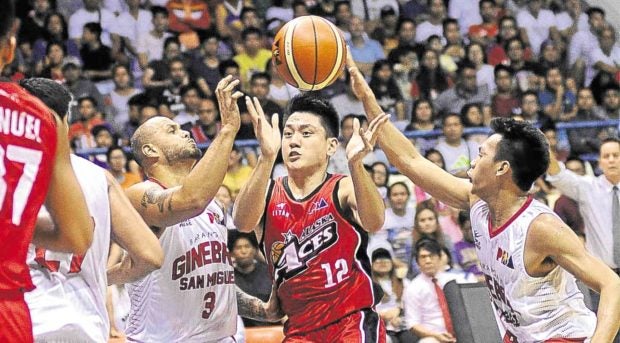 The police said that Teng and his companions, Norbert Torres — who plays for the PBA’s Rain or Shine Elasto Painters — and Torres’ brother Thomas were walking outside Early Night Club at Bonifacio Global City (BGC) in Taguig City around 2:30 a.m. when two intoxicated men tried to call their attention, police said.

The three basketball players, who all attained a fair measure of fame during their time at DLSU, ignored the suspects, American citizen Edmar Lacanlale, 40 and Williard Basili, 37, according to Eleazar.

Witnesses said the suspects then began to curse at Teng and the Torres brothers, who had also been drinking, even “cursing their girlfriends.”

A report from the head of the BGC police, Chief Insp. Joseph Austria, said a heated argument and brawl ensued. It lasted about two minutes before policemen arrived at the scene.

But by that time, Norbert had already been stabbed in the left arm while Teng and Thomas had sustained multiple stab wounds on their bodies.

The three were taken to St. Luke’s Medical Center-BGC where Teng and Thomas remained on Sunday afternoon although they were reported to be in stable condition.

Norbert, on the other hand, was released after receiving 11 stitches.

The suspects were immediately arrested outside the club and would be charged in the Taguig City Prosecutor’s Office with frustrated homicide and physical injuries.

In a statement on Sunday, the PBA said the incident involving Teng and the Torres brothers were “currently under investigation by authorities.”

“The players are confined and are recuperating at a hospital in Taguig. Let us all pray for their speedy recovery,” it said.

Eleazar said Basili used a ring knife (a ring with a miniature knife) during the scuffle. The police, however, failed to recover it from him.

“This type of knife is really for fighting, for self-defense,” Eleazar added.

“It should not be brought by anyone to public places, especially those serving intoxicating beverages,” he said.

Chief Supt. Tomas Apolinario Jr., Southern Police District director, said that as a precaution, policemen would be permanently stationed round- the-clock at Fort Strip, the upscale row of bars in BGC where the stabbing occurred.

“We cannot inspect everything, especially these types of pocket knives that can even be slipped under socks,” Apolinario said. “But having roving personnel in the area will be a deterrent.”

The police said they were coordinating with Early Night Club to study closed-circuit television footage of the area during the incident.

“Drinking isn’t against the law. It was already 2 a.m., what would you expect?” Eleazar said.

“But when you drink, let the alcohol flow to your stomach, not your head. Otherwise it will lead to these kind of incidents,” he added.

According to the police, they were looking into the backgrounds of the suspects who both took frequent trips abroad.

Eleazar said the police would recommend to the Department of Justice that a hold departure order be issued against Lacanlale, a general construction contractor, and Basili, a construction inspector.