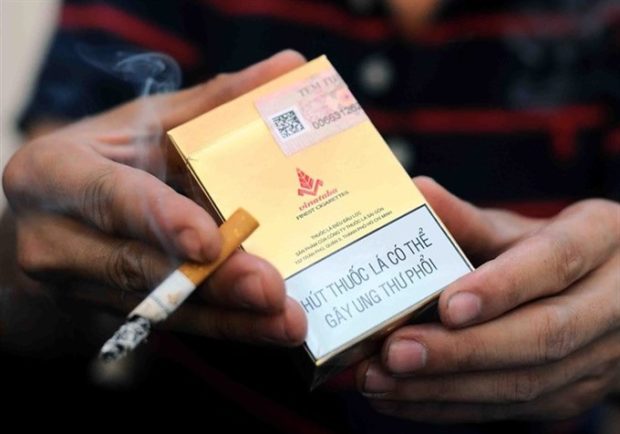 Smoking now claims over 100 lives in Vietnam every day and the number is expected to nearly double in 2030.

The data is reckoned by the Vietnam Tobacco Control Fund under the Ministry of Health.

According to the Global Adult Tobacco Survey (GATS), conducted by the ministry and the General Statistics Office in 2015, 53.5 per cent of non-smokers, equal to 28.5 million of adults were exposed to tobacco smoke at home, and 36.8 per cent of non-smokers, who worked indoors, equal to 5.9 million of adult, were exposed to tobacco smoke at the workplace.

In the meantime, another statistics of the ministry showed that it is estimated about 60.7 per cent of students started smoking at the age of 7-13.

The World Health Organization (WHO) said that non-communicable diseases contribute to 73 percent of all deaths countrywide. Tobacco use is one of the major causes.

Medical experts said tobacco smoking is a leading factor causing an increasing risk of contracting heart-related diseases. The increase is proportional to the amount of tobacco and the smoking time.

It costs the country’s smokers a total of VND31 trillion (US$1.36 billion) each year. In addition to the cost of smoking, the total cost of treatment and damage due to illness and premature death for 5 groups (lung cancer, gastrointestinal-respiratory cancer, chronic obstructive pulmonary disease, heart attack, and stroke) caused by smoking over VND23 trillion (about $1 billion) per year.

According to the United States’ Centre for Disease Control and Prevention, smoking during pregnancy causes additional health problems, including premature birth (being born too early), certain birth defects, and infant death.

Smoking makes it harder for a woman to get pregnant. Women who smoke during pregnancy are more likely than other women to have a miscarriage. Smoking can cause problems with the placenta—the source of the baby’s food and oxygen during pregnancy. For example, the placenta can separate from the womb too early, causing bleeding, which is dangerous to the mother and baby.

Smoking during pregnancy can cause a baby to be born too early or to have low birth weight—making it more likely the baby will be sick and have to stay in the hospital longer. A few babies may even die.

Smoking during and after pregnancy is a risk factor of Sudden Infant Death Syndrome (SIDS). SIDS is an infant death for which a cause of the death cannot be found.

Babies born to women who smoke are more likely to have certain birth defects, like a cleft lip or cleft palate.

Experts believe the low price of tobacco products is the main cause leading to its widespread use.

The tax on tobacco products in the country currently is quite low compared to other countries, about 35-40 per cent of retail price while the world average rate is 56 per cent and much lower than the WHO’s suggested 70 per cent.

In response to the situation, the Ministry of Finance proposed two plans to raise tax on tobacco at a meeting held early May.

However, many experts said the rate is still low. They suggested that the additional charge should be VND2,000-5,000 (11-22 cents) per pack of 20 cigarettes.

Phan Thị Hai, deputy director of the Tobacco Consequences Prevention Fund under the Ministry of Health, said the ministry agreed with the suggested additional charge.

Dao The Son, a lecture of the Hà Nôi-based Commercial University, by increasing tax to VND5,000 per cigarette pack, Vietnam can stop 1.8 million people from smoking, prevent 900,000 smoking-related early deaths and get VND10.7 trillion ($470 million) in the State budget each year.

In addition to raising tobacco tax to reduce the number of smokers in the country, authorized agencies have also launched supporting programs to help smokers in quitting tobacco. For example, Hanoi-based Bach Mai Hospital and HCM City-based Gia Dinh Hospital have run hotlines to give advice for thousands of smokers in an attempt to quit tobacco for several recent years.