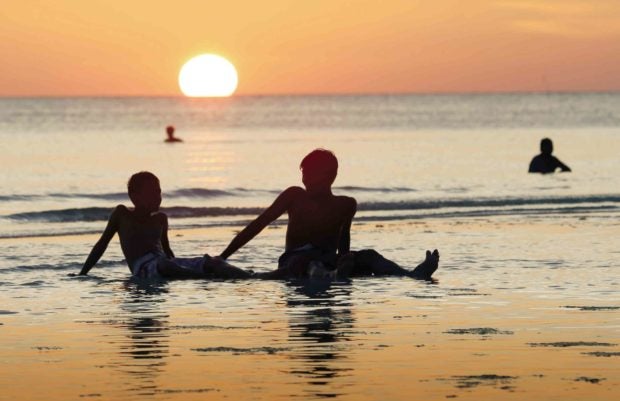 CLEAR VIEW Locals enjoy the sunset at Station 1 in Boracay on April 27, a day after the resort island was closed to tourism.—LYN RILLON

BORACAY ISLAND — If there was one thing clear that came out of a hearing of the House natural resources committee here, it was the lack of clarity on what the government actually wanted to do to fix the resort island’s environmental, social and economic woes.

Legislators got no definitive answer to a question almost all of them were asking during the hearing—is there a comprehensive plan to fix Boracay two months into its closure to tourism?

The one question that residents asked aloud during the hearing was whether there was a comprehensive plan to help them survive the island’s closure without their jobs and sources of livelihood. There was no clear answer to that, either.

Rep. Carlos Zarate, of the militant party-list group Bayan Muna, said that while the infrastructure component of the rehab plan was clear about its objectives — expanding roads and improving water quality — there was no clear plan on addressing residents’ needs.

“Real lives are being affected,” said Zarate, a critic of the Duterte administration.

“We care for the environment but we must first and foremost take care of the people, especially the poor,” he said.

Another party-list lawmaker, Rep. Arnel Ty, said the ideal procedure should have been the crafting of a comprehensive plan prior to the island’s closure.

“It’s a case of the carriage coming before the horse,” said Ty, of the group Liquefied Petroleum Gas Marketers’ Association, who chairs the natural resources committee.

President Rodrigo Duterte, weeks after calling Boracay a cesspool, had approved a recommendation by his Cabinet to close the island for six months starting on April 26.

He issued Executive Order No. 53 on April 26 directing the local government of Malay to bar tourists from entering Boracay.

It also declared a state of calamity in three villages of Boracay—Yapak, Balabag and Manoc-Manoc.

Zarate said there appeared to be a “disconnect” in the government’s plans for the island.

He said that while the rehabilitation period was meant to restore the island as a prime tourist destination, the President had been blabbering about subjecting the entire area to agrarian reform.

“Which is which?” Zarate said.

The plans had been submitted for appropriation, which the task force had estimated to cost at least P1.3 billion.

The release of the Boracay Action Plan was expected in August after authorities finished determining the island’s new carrying capacity in July, Adobo said.

On May 28, the regional interagency technical working group (TWG), headed by the National Economic and Development Authority, convened for the first time in Iloilo City.

The TWG, composed of national and local government agencies, was expected to draft a medium-term rehabilitation and recovery program that would focus on four main concerns: enforcement of laws, pollution control and prevention, restoration of damaged ecological systems, and sustainability of tourism.

During the public hearing, Nenette Aguirre-Graf, president of the Boracay Foundation Inc., asked national government agencies to involve business operators and residents in the planning stage.

She also asked the task force to put up centralized help desks for residents seeking aid or information.

Boracay resident Olive Abañera, of the We Are Boracay organization, said residents were not consulted.

“We are not against rehabilitation,” she said at the hearing. “But why are we bearing the brunt when we are not responsible?” she said.

The help that the government was extending had been made inadequate by the opening of classes soon, she said.—WITH A REPORT FROM JEROME ANING