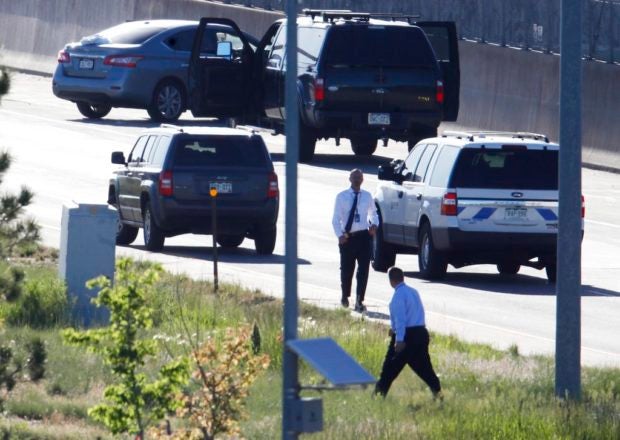 Detectives from the Denver Police Department, foreground, investigate near where a Nissan sedan, top left, being driven by an Uber driver crashed into a retaining wall along Interstate 25 south of downtown Denver early Friday, June 1, 2018. The driver allegedly shot and killed a passenger at 2:45 a.m. after a confrontation broke out between the two while headed southbound on the interstate. (AP Photo/David Zalubowski)

DENVER—An Uber driver arrested in the fatal shooting of a passenger told a witness that he opened fire after his customer tried to attack him, police said Friday.

However, a partially redacted police report says driver Michael Andre Hancock, 29, declined to talk to investigators without a lawyer present about the shooting on Interstate 25 just before 3 a.m.

Police said the man killed, Hyun Kim, 45, was found lying on the floor board of the car’s front passenger seat.

The witness called 911 and passed the phone to Hancock, who identified himself to the dispatcher, the report said.

Police said Hancock had trouble breathing after officers arrived, placed him in handcuffs and removed a semi-automatic pistol from his waistband. He was taken to a hospital for treatment and later arrested for investigation of first-degree murder.

Uber said in a statement that it has removed Hancock’s access to its app and will work closely with police.

“We are deeply troubled by the events in Denver today. Our thoughts are with the families of those involved,” the company said.

Uber policy bars riders and drivers from carrying firearms except in states that expressly prohibit companies from banning guns.

Colorado allows drivers to carry firearms to protect themselves and their property. However, Uber spokesman Andrew Hasbun said the company’s policy applies in the state.

Police said Kim was shot numerous times, and 10 spent cartridges were found on the shoulder of the interstate, across the lanes of traffic from the wall of an onramp where Hancock’s silver sedan crashed head on.

Hancock’s father, also named Michael Hancock, told KDVR-TV that his son has a wife and two children, is a counselor at a troubled boys’ home and attends college.

“He’s a Christian kid, and he’s all about making the world a better place,” the elder Hancock said.

Kim’s family declined to comment, according to the television station.

Hancock is being held in Denver’s jail, and it’s not clear if he has a lawyer yet. It will be up to prosecutors to decide whether to charge him with murder or any other crime.

Court records show Hancock has had a few traffic tickets but has no criminal record in Colorado. /jpv