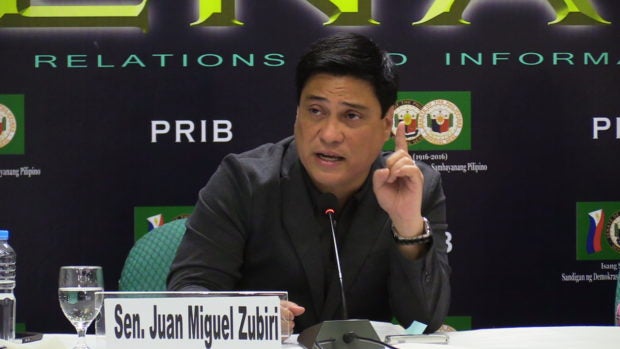 Before Congress resumes sessions on July 23, contingents from the Senate and the House of Representatives will sit in a bicameral conference to iron out differences between their respective bills on the Bangsamoro Basic Law (BBL) and craft a unified version, likely with help from the Bangsamoro Transition Commission (BTC), which drafted the original bill that was certified urgent by President Rodrigo Duterte.

“It’s going to be bloody,” Zubiri said of the deliberations.

The Senate approved its bill past midnight on Thursday hours after the House passed its version.

So how do the House and Senate versions of the BBL compare with each other?

Where they meet, diverge

Both agreed on holding only one plebiscite to determine which areas in Mindanao would join the envisioned Bangsamoro political entity. They had scrapped BTC’s planned multiple plebiscites—one every five years for 25 years.

The areas that could vote to join the region include the present Autonomous Region in Muslim Mindanao (ARMM), the cities of Cotabato and Isabela, six municipalities in Lanao del Norte (Baloi, Munai, Nunungan, Pantar, Tagoloan and Tangkal), 39 barangays in six municipalities in Cotabato province (Aleosan, Carmen, Kabacan, Midsayap, Pigkawayan and Pikit), and adjacent areas.

Both bills do not have an “opt-out” provision for local government units (LGUs) that may want to leave the Bangsamoro region.

Both agreed to reduce the annual block grant, or the development fund automatically appropriated for the Bangsamoro region annually, from the proposed 6 percent to 5 percent of the central government’s revenue.

The House, however, inserted a provision stating that “the block grant shall be released based on development plans and programs and performance-based criteria” prescribed by a fiscal policy board.

To be sure, there are similarities but there are more differences between the two versions of the proposed BBL.

One major difference is on the wealth-sharing arrangement between the Bangsamoro government and the central government.

The House kept the BTC proposal—75-25 of locally generated revenue in favor of the Bangsamoro. The Senate had set it at 50-50.

The Senate version stated explicitly that the Bangsamoro people were “citizens of the Republic of the Philippines” under the Constitution. This does not appear in the House version.

The Senate deleted mention of Palawan as belonging to the historical range of the Bangsamoro.

The House identified 20 reserved powers of the central government, including those covering the financial and banking system, the Armed Forces, the National Police, jail management, fire protection, the Coast Guard and elections.

The House said “primary responsibility over public order and safety” over the region would be a national government function.

The Senate version removed the entire provision, stating that all powers not granted to the Bangsamoro shall be vested in the central government.

The House identified 21 “concurrent powers” shared by the central government and the Bangsamoro, including those over energy, natural resources, public utility operations, budgeting, education and health.

For the House, the power over Islamic banking and the Shariah justice system has to be shared with the national government in recognition of the functions of the Bangko Sentral ng Pilipinas and the Supreme Court.

The Senate, however, removed this section on “concurrent powers” altogether as it may cause confusion.

It also removed the term “exclusive” from the section on the Bangsamoro’s exclusive powers, saying its government shall just “exercise authority” over certain identified sectors. The House retained the word.

The Senate added a prohibition on political dynasty, which does not appear in the original BTC or House versions.

The Senate explicitly stated that the rights of indigenous peoples (IPs) granted by the Indigenous People’s Rights Act (Ipra) shall be preserved and not diminished.

The House did not mention the Ipra, stating only that the Bangsamoro government shall recognize and promote the rights of non-Moro IPs “within the framework of the Constitution and existing laws.”

House members wary of constitutionality retained the national government’s power over the law enforcement agencies, the administration of justice and the functions of the constitutional commissions.

Congress leaders have assured President Duterte that the unified version of House Bill No. 6475 and Senate Bill No. 1717 would be ready for signing into law on July 23, the day he delivers his third State of the Nation Address.

Zubiri said one contentious provision was allowing five towns in Lanao del Norte and 39 barangays in North Cotabato to join the Bangsamoro region through a majority vote of its residents in a plebiscite.

These LGUs had voted for inclusion into the ARMM in 2001, but remained in their predominantly Christian mother provinces or towns that had opted out of the autonomous region.

The House added a qualifier to its version: The LGUs may only join the Bangsamoro region if their mother province or town votes for inclusion.

The Senate retained the BTC proposal upon the appeal of the peace negotiators.