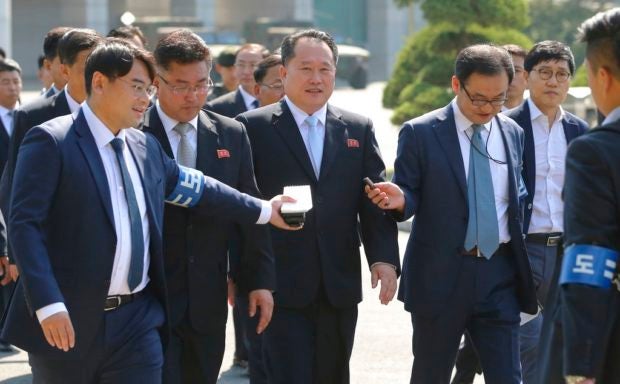 The head of the North Korean delegation Ri Son Gwon, center, talks with South Korean reporters as he arrives to meet with South Korean Unification Minister Cho Myoung-gyon at the southern side of Panmunjom in the Demilitarized Zone, South Korea, Friday, June 1, 2018. (Korea Pool via AP)

SEOUL, South Korea—Bitter rivals North and South Korea are on talking terms again, but their surprising cordiality still has moments of awkwardness, such when a senior North Korean official scolded a South Korean reporter over a question he didn’t like.

In a brief exchange that displayed the fundamental differences between the countries, North Korean official Ri Son Gwon reacted with irritation Friday when a South Korean reporter asked him whether North Korea’s grievances against the South had been resolved as he arrived for talks on easing tensions at the border village of Panmunjom.

Ri, chairman of the North Korean agency that deals with inter-Korean affairs, seemed stunned by the question. After a moment of silence, Ri, who in the past has been described by South Korean counterparts as hot-tempered, ripped into the reporter.

“Journalists can ask questions from different angles. But don’t you think that the questions should change, to meet the demand of changing times?” Ri said. “You obviously know which side caused the situation to become serious. Then why are you asking me whether the (problems) have been resolved?”

Ri said he would consider similar questions as “discourteous” in the future. He called for questions that would “promote reconciliation and cooperation.”

Ri is hardly the first North Korean official to chastise South Korean reporters over questions they found uncomfortable. But officials have been unusually cordial in recent months as North Korea reaches out to South Korea and the United States to reduce tensions.

While South Korean reporters have a reputation for aggressiveness, the question to Ri at Panmunjom was fairly predictable.

North Korea had called off the high-level talks last month over what it saw as bad faith from the southern side. A surprise summit last week between North Korean leader Kim Jong Un and South Korean President Moon Jae-in put the meeting back on for Friday.

The senior officials from the two sides agreed to establish a liaison office in the North Korean border town of Kaesong and hold military and Red Cross talks later this month on reducing tensions and resuming reunions of families separated by the 1950-53 Korean War.

Kim and Moon held their first summit at Panmunjom on April 27 and issued vague aspirations for a nuclear-free Korean Peninsula and permanent peace. But relations chilled when North Korea canceled the high-level meeting and threatened to walk away from a planned summit between Kim and U.S. President Donald Trump because of the South’s participation in military exercises with the United States and comments from U.S. officials. Trump canceled the summit, then said it may still take place, shortly before Kim and Moon met again on May 26.

Diplomacy is also accelerating between the U.S. and North Korea to prepare for a summit, which may take place June 12 in Singapore. But Ri, still seething over the grievances question, wasn’t willing to talk about the potential meeting with reporters.

“Go fly to Singapore to ask that question,” he told the South Korean reporter. “This is Panmunjom.”

Ri was in a better mood in the meeting room with South Korean officials, lightheartedly mentioning his earlier interaction with the reporter and even proposing that the meeting be opened to the media.

“Reporters are the spokesmen of justice and truth,” Ri said. “If they get to be with us through the whole meeting, they will think, ‘Wow, the North-South high-level talks are producing a good outcome’ and will vividly report what happens.”

South Korean Unification Minister Cho Myoung-gyon persuaded Ri to keep the discussions behind closed-doors for the sake of efficiency.

There have been plenty of awkward exchanges between North Korean officials and South Korean journalists during tenser times. In 2008, senior North Korean diplomat Hyun Hak Bong angrily wagged a finger at South Korean reporters who asked about speculation over health problems for then North Korean leader Kim Jong Il, the late father of the current leader, fuming about “nonsense” spread by “bad people who don’t wish our republic well.”

The interactions have been noticeably different in recent months. In April, senior North Korean official Kim Yong Chol, who is currently in the United States and plans to meet Trump, surprised visiting South Korean reporters by apologizing for media coverage problems during a joint cultural event in Pyongyang.

But Kim Yong Chol also displayed a dark sense of humor, introducing himself by saying, “Hello, I am the man you blame for the sinking of the Cheonan.”

South Korea has accused Kim, a former military intelligence chief, of being behind the sinking of the South Korean warship Cheonan and the shelling of a border island which together killed 50 South Koreans in 2010. /jpv