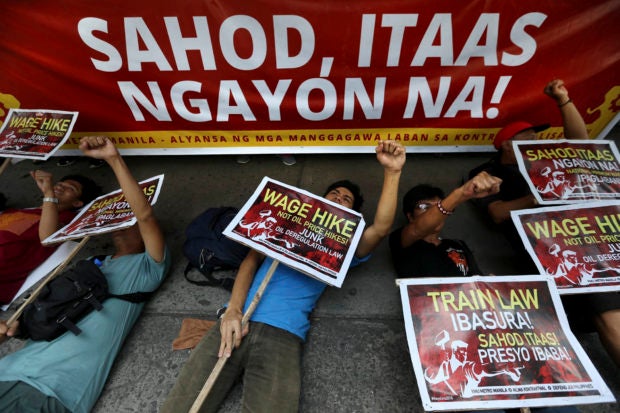 Protest action by members of labor groups KMU Metro Manila, Alma Kontraktwal and Defend Job Philippines for higher wages and against another round of fuel price hikes by oil companies held outside the Department of Trade and Industry main office. INQUIRER PHOTO/LYN RILLON

The Trade Union Congress of the Philippines (TUCP) is seeking a P320 across-the-board wage increase for minimum wage earners in the private sector in all regions that would raise the minimum daily pay to between P576 and P832, which the group says covers only the daily survival of workers.

The TUCP party-list group filed House Bill No. 7805, or the proposed “Living Wage Act of 2018,” in the House of Representatives two days after the Makabayan bloc filed HB 7787 that would set a national daily minimum wage of P750.

Both bills justified the need to adjust the minimum pay because of the rising cost of living that workers blame on the Tax Reform for Acceleration and Inclusion (TRAIN) Act, which imposes an excise on fuel and other goods starting Jan. 1.

The inflation rate rose to a five-year high of 4.5 percent in April and is expected to further go up to between 4.6 and 5.4 percent in May, according to central bank economists.

“The wage hike is already due, but the question is, how much?” Bello said.

“We have to consider economic factors, inflation rate, prices of basic commodities, and the impact of (these on) the lives of workers, without also forgetting the effect on our employers,” he added.

Bello said the study on the minimum wage hike would take only a month.

The bill that TUCP Rep. Raymond Mendoza, also president of the group, filed on Wednesday would raise the current daily minimum wage in Metro Manila to P832.

In the Ilocos region, which has one of the lowest minimum wages for nonagricultural workers, the daily wage would increase to between P576 and P630.

The P320 increase would be applicable to all workers in the private sector regardless of employment status, position, industry, enterprise size, mode of payment and region, according to the TUCP measure.

Violators would face a minimum fine of P200,000 or imprisonment of one to two years or both.

In a briefing at the TUCP headquarters on Thursday, the group’s spokesperson, Vicente Camilon Jr., said the bill was reasonable and “realistic” since the increase would cover only the daily survival of workers.

“The bill is only for the workers to meet their basic daily needs,” and cope with the spiraling costs of basic goods and services, Camilon said.

In a statement, Mendoza said the P832 daily wage was still a “survival wage” compared with “the huge incomes of business owners, investors and those who belong to the top management.”

In the bill’s explanatory note, Mendoza noted that since the Wage Rationalization Act was passed in 1989, the Regional Tripartite Wages and Productivity Boards (RTWPB) had issued 305 wage orders, “yet not one granted a real wage that is sufficient to cover the basic needs of the workers and the families.”

TUCP said its proposed wage increase was computed based on the current inflation rate of 5.2 percent.

The rise in consumer prices requires a P26.24 increase in the minimum wage earners’ daily pay, while an increase in the costs of electricity and water consumption requires an additional P51.2 adjustment in wages, the group said.

Also, since workers were not granted a real wage increase for the past 29 years since 1989, a “P5 per year share as equity supplement, or P145” would be just, TUCP said.

The group assailed the claim by employers that a wage increase would be detrimental to workers because they could lose their jobs due to shutdowns.

Mendoza said this argument “moves away from the main purpose of the minimum wage, which is to redistribute income to lowly paid workers.

“Employment growth is a function of policy and governance and not forcing the workers to bite the bullet of an impoverished life,” he added.

Mendoza said “workers are poor because our government fails to leverage their economic plight and fails to provide them opportunities increasing their choices to craft their own future.”