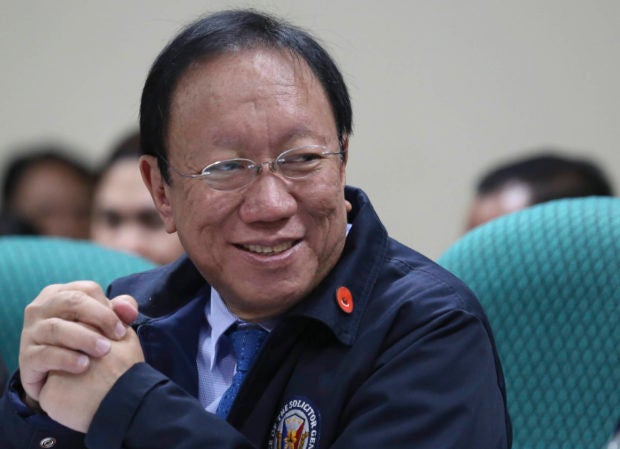 Solicitor General Jose Calida has dismissed calls for him to resign, saying he did not commit graft when he kept his shares in a family-owned security agency that bagged contracts worth P261 million with the government.

“No. Why should I [resign]? I’ve been a lawyer since 1974. I can handle all the attacks. The question is, can they handle my counterattack?” Calida said in a television interview.

Calida described as “a big fat lie” allegations of his involvement in an extramarital affair and his diversion of some P1.8 million in public funds to a mistress, as claimed in a complaint filed against him in the Office of the Ombudsman.

Sen. Francis “Kiko” Pangilinan has urged Calida to step down over deals that his family-owned Vigilant Investigative and Security Agency Inc. (Visai) had entered into with several government agencies. Other lawmakers made similar calls after the complaint was filed in the Office of the Ombudsman.

Visai bagged contracts worth a total of P261 million, including P96.19 million with the House of Representatives, since Calida was appointed solicitor general in 2016. The agency is chaired by Calida’s wife, Milagros.

Sen. Aquilino Pimentel III said Calida was not a Cabinet member and thus, not required to divest himself of shares in Vasai. “There is no vow of poverty if you join [the] government,” he said.

The complaint of graft, malversation of funds and misconduct against Calida was filed by Jocelyn Marie Acosta Niperos, a supporter of ousted Chief Justice Maria Lourdes Sereno.

“This woman (complainant) admits that she has no evidence. She who alleges must prove it,” Calida said in an interview with CNN Philippines on Thursday.

“What she is saying is actually a vicious, malicious concoction. They are now fabricating charges against me. They want to destroy my family,” he said.

“There will be a day of reckoning. I’m just waiting that the charges would be given to me so I can answer them point by point,” Calida said.

“[I will file cases] against those who are maligning me, slandering me, libeling me,” he added.

He insisted that there was no conflict of interest even if he did not divest himself of his shares in Visai. “Under the law, I have the choice either to resign or to divest,” he said.

Calida cited cases that had been decided, like that of a court stenographer who did not disclose her business.

“What did the Supreme court say? Well, the courts do not regulate the operations of markets and therefore, on that score, there is no crime and conflict of interest there,” he said.

“The fault of the accused was that she did not disclose that he had a market stall. Me? I disclosed in my SALN (statement of assets, liabilities and net worth) that I have financial interests with Vigilant,” Calida said.

Securities and Exchange Commission (SEC) records show that Calida resigned as chair and president of Visai before he was appointed solicitor general in 2016.

According to SEC records, however, Calida still owned 60 percent of the company’s shares, while his wife and three children had 10 percent each.

Malacañang is open to an investigation of Calida by the Senate and the Department of Justice, said presidential spokesperson Harry Roque.

Speaker Pantaleon Alvarez said the House was not inclined to conduct an inquiry into the controversy, noting that Justice Secretary Menardo Guevarra had already said his department would “take a look” into the contracts “to satisfy everyone.”

Alvarez played down the issue of the Calidas’ gaining security service deals with various government entities, including the House of Representatives.

“As long as it went through the proper procurement, the bidding, it is not our obligation to know who the owner is,” the Speaker said on dzMM late Wednesday.

Calida said it was not true that Visai was cornering government contracts left and right, as it lost bids for three contracts after he left the agency.