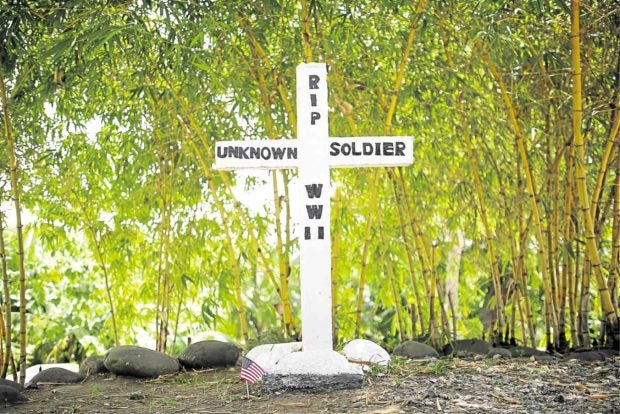 NEVER FORGOTTEN A group of war veterans vow to identify American and Filipino soldiers buried in a mass grave in Davao City to honor their memory. —KARLOS MANLUPIG

DAVAO CITY — Marked only by a white cross over 1.62 meters (6 feet) tall and covered by a thicket of Japanese bamboo, a mass grave known as the “tomb of unknown soldier” has recently been the focus of attention by an American war veterans’ group here.

Scott Cameron, commander of the American Legion “Battle of Davao” Post 66, said his colleagues were trying to identify more than 30 American and Filipino soldiers who died trying to liberate this city from the Japanese during World War II, and whose remains were buried in this common grave.

The tomb is within the 1.4-hectare boneyard at the western edge of the American and Filipino Veterans Masonic Memorial Park on Madapo Hills here.

“Our main objective is to make people aware that we have a mass grave here,” Cameron said during Monday’s wreath-laying ceremony to mark the Memorial Day celebration for American and Filipino servicemen killed in battle 73 years ago.

Cameron said identifying the 32 soldiers buried there was still “a work in progress,” marked with visits to the United States Library of Congress, military archives, graves registry and research on the military units that fought during the monthlong campaign to drive out the Japanese from Davao in 1945.

“This is a very long and hard process,” he said.

Rand Bentson, Post 66’s second vice commander, said the 24th Division was the unit of the US Army that saw action in Davao from April to May 1945.

Cameron said the search would mean checking the list of those killed and missing, as well as possible DNA testing of the exhumed remains and cross-matching the results with available records of slain and missing soldiers during the war.

Established in 1959, the American-Filipino veterans’ memorial park has been kept and maintained by the Association of Descendants of American and Filipino Veterans and Masons.