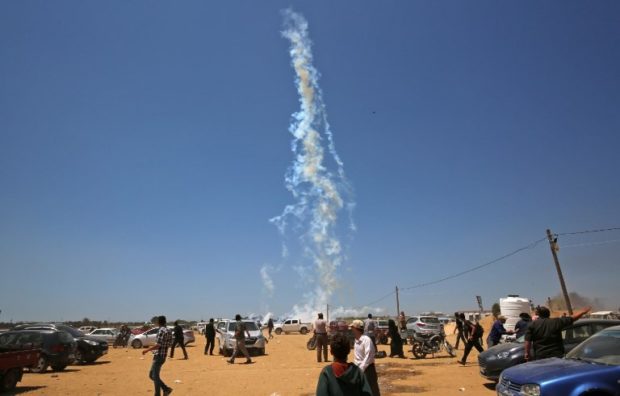 An Israeli drone drops tear gas canisters on Palestinian protesters during clashes with Israeli forces along the border with the Gaza strip east of Khan Yunis on May 14, 2018, as Palestinians protest over the inauguration of the US embassy following its controversial move to Jerusalem. AFP

Israel has reportedly barred Indonesian passport holders from entering the country in possible retaliation for Jakarta’s alleged decision to bar entry to Israelis in response to the ongoing violence in Gaza.

The Indonesian Foreign Ministry said it had received the information about the ban, but declined to comment on the policy.

“Every country indeed has its own visa policy,” ministry spokesperson Arrmanatha Nasir said on Wednesday.

The spokesman also stopped short of confirming whether Indonesia had barred Israelis from entering Indonesia following the recent violence in Gaza in which dozens of Palestinians were killed by Israeli soldiers.

Indonesia and Israel have no diplomatic relations. Indonesians, however, have been able to visit Israel for religious pilgrimages, while Israelis can also visit Indonesia on what is referred to as a “calling visa” or “limited stay visa”.

The report about Israel’s move was widely circulated among travel agents offering trips to the Middle East on Wednesday.

“On May 29 we received a circular from the Israeli Ministry of Interior that was sent from our partners in Israel, saying that after June 9 Indonesian passport holders will not be able to enter Israel,” a message issued by a travel agent in Surabaya said.

The report quoted a notification issued by the Israeli Border Control Department based on an order from the country’s Foreign Ministry.

Meanwhile, the website middleastmonitor.com quoted an Israeli Foreign Ministry spokesman on May 23 that Indonesia had banned Israelis from entering the country in response to “the massacre in Gaza.”

The spokesman, Emmanuel Nahshon, said that the Israeli government was trying to reverse Indonesia’s decision, the website reported.