More than 100 smuggled vehicles destroyed at Bureau of Customs 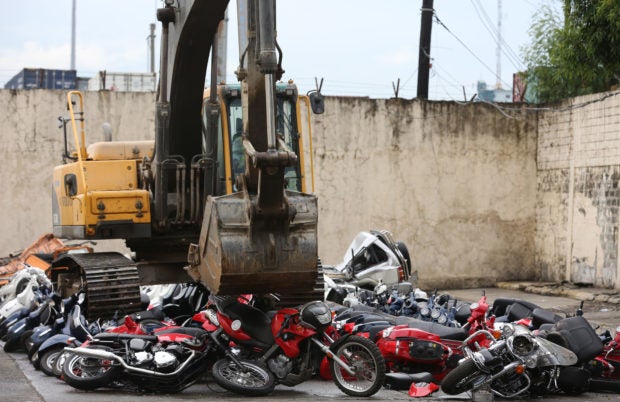 President Rodrigo Duterte on Wednesday led the destruction of more than a hundred smuggled cars and motorcycles worth more than P34 million, nearly four months after several luxury vehicles were destroyed in the government’s campaign against smuggling.

But still not included in the bulldozed vehicles were the  Ferrari, Lamborghini and McLaren cars confiscated earlier by the Bureau of Customs (BOC) at Manila International Container Port.

Customs Commissioner Isidro Lapeña said those cars, which were among the 24 luxury vehicles seized by the bureau, were still under litigation.

“If the final decision [in] the case is in favor of the government, [then] the same will happen to them. They will be destroyed,” Lapeña said.

A used BMW motorcycle, a Mitsubishi Pajero and a Volvo were also destroyed.

In the past, the BOC auctioned off seized cars to generate income for the government.

The President, however, ordered a stop to the practice and directed the BOC to destroy seized cars in a bid to discourage smugglers from working with erring customs employees to rig auctions in their favor.

“The smugglers have long cheated the government. This has to stop. The connivance of smugglers with some customs employees in bringing smuggled vehicles back to the smugglers, disguised in legitimate auction proceedings, has to stop as well to level the playing field for the legitimate businessmen,” Lapeña said.

In February, the BOC destroyed 20 luxury cars worth P61 million. These include such brands as Jaguar, Mercedes Benz, Lexus and Corvette.