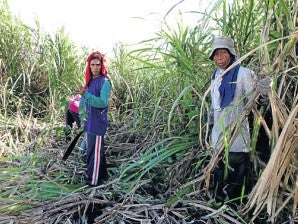 WAITING GAME Life is hard in Hacienda Luisita but Willie Ligado (right), a migrant from Negros province, says the drudgery has been eased by reports that the Supreme Court has decided to distribute the vast sugar estate to farm workers like him. TONETTE T. OREJAS/ INQUIRER CENTRAL LUZON

MANILA, Philippines — The Supreme Court has ordered the distribution of about 5,000 hectares of Hacienda Luisita, the massive sugarcane plantation owned by President Benigno Aquino III’s family in Tarlac, to the farmers who have tilled the land for decades.

AMBALA,  a farmers’ union in the Hacienda and one of the respondents of the case, confirmed the decision and urged President Aquino to immediately implement the high tribunal’s ruling.

“Agrarian reform has promised to give agricultural land to the farmers,” said AMBALA, quoting from a supposed copy of the decision, which the group obtained.

“But having shares of stock in HLI will not give control or ownership of the land to the farmers,” the decision was further quoted as saying.

“Upon review of the facts and circumstances, We realize that the FWBs [farmworker beneficiaries] will never have control over these agricultural lands for as long as they remain stockholders of HLI,” the court said.

The decision to give land to the Hacienda Luisita farmers was agreed upon by 14 of the 15 Supreme Court justices.

Associate Justice Antonio Carpio did not take participate in the voting.

AMBALA’s counsel Jobert Pahilga hailed the Court’s ruling on Hacienda Luisita and urged Aquino to order DAR to implement it as soon as possible.

“He should not dilly-dally and instead order the Department of Agrarian Reform to start the actual distribution of the lands to the farm workers,” Pahilga said.

Pahilga also noted that the Supreme Court directed HLI to pay farmers a total of P1.3 billion for the sale of three large parcels of land.

“President Aquino should know that the actual land distribution of Hacienda Luisita to the farm workers and the payment of 1.3 billion pesos to them is morally and legally right, just, at ang matuwid na daan,” he said.

Pahilga said the Supreme Court’s decision to give land to farmers of Hacienda Luisita, a test case in the country’s agrarian reform, was a victory for farmers.

“We congratulate and salute the farmworkers of Hacienda Luisita. For without them, without their militant, collective and unwavering stand to fight for land distribution, we could not have reached this stage of the struggle,” he said.