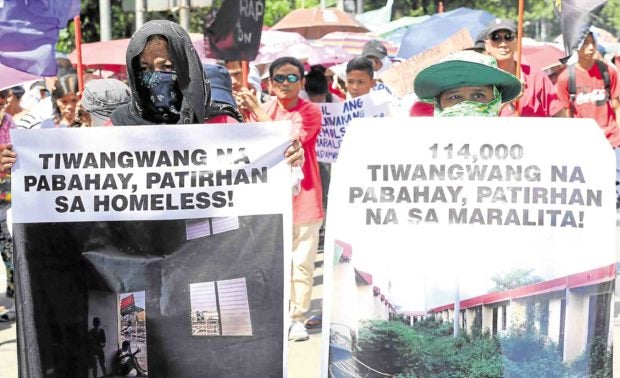 PLEA FOR SHELTER Kadamay members are asking the government to give them idle units in its housing projects.—EDWIN BACASMAS

But Kadamay leaders have reportedly discouraged their members from signing any loan agreement, according to Ramon Paragas, NHA director for Bulacan province.

Paragas disclosed this on Tuesday after about 1,000 Kadamay members marched to the NHA office here to demand to have entry passes for the houses they forcibly took in March last year. The entry passes would legitimize their stay in those houses.

Elsie Trinidad, NHA spokesperson, said the agency would not issue the entry passes until Kadamay families agreed to the loan terms.

Gloria Arellano, Kadamay chair who led the rally, assailed NHA for supposedly reneging on a promise to explain the loan arrangements for the houses. She said they had not rejected the payment terms.

Paragas said they set meetings with Kadamay to finalize the deal and to release the entry passes.

“But the leaders have been stopping their members from signing the documents,” he said.

Without the entry passes, about 8,000 Kadamay members occupying the houses could not avail of the benefits given by the Pandi government or vote in the town, said Arellano.

“Entry passes would bring [the Kadamay families in Pandi] a step closer to accessing basic services like water and electricity. We wanted to show that homeless Filipinos should assert their rights and have access to social services,” she said.

Paragas said an NHA resolution approved by President Duterte directed the agency to redistribute the 1,980 houses occupied by Kadamay in Villa Louise and Pandi Heights 2 that were originally meant for soldiers and policemen.—CARMELA REYES-ESTROPE